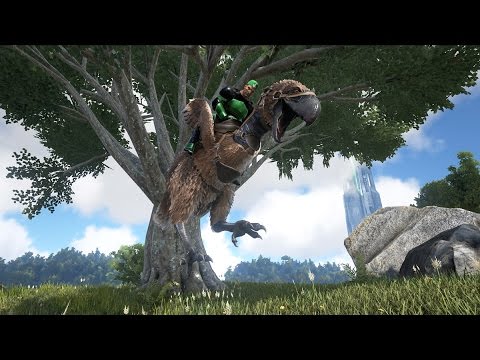 Studio Wildcard, the studio that never sleeps, is bombarding players with an aerial assault today in the newest update to ARK: Survival Evolved. Steam survivors will be delighted that the highly anticipated Tribal Alliances feature has been implemented, along with the frightening glide-able Terror Bird and the multi-use Grappling Hook, handy for traversing the ARK in entirely new ways. Now new players can start the epic survival-adventure ARK: Survival Evolved during the Lunar sale on Steam for only $19.99 (33% off standard price).

The Terror Bird, or Phorusrhacidae Rapidesultor, is a tamable and aggressive avian capable of high-speed sprints and brief leaps. It is not a flying bird per say, as its flight is comprised of short, sustained “Joust”-like glides or leaps. At eight to 12 feet tall, the Terror Bird is aggressive, but still tamable and ridable, making it an excellent combat mount, particularly for harassing and scouting. Riders of The Terror Bird gain most of the benefits of a fast, mobile ground-based theropod, while also gaining some of the freedom of movement from a flyer. Assuming the rider can coax it into staying in the air over a long leap! The Terror Bird shows traits related to theropods such as Utahraptor, Carnotaurus, and Tyrannosaurus, though its attacks differ, as they are made up of lightning dashes and leaping slashes.

The Grappling Hook is a game-changing tool enabling Survivors the ability to scale cliffs, hitch a ride by attaching to a flying creature, wrangle other players/prisoners, or even small creatures to drag along (“Get over here!”). Learning how to regularly use this tool will alter the nature of your attacks and dramatically expand the range of your travels with greater ease and fun!

Today’s ARK update also includes:•Tribe Alliances (PvE and PvP): Yes, finally, small Tribes can band together against larger ones!
•Fishing Upgrade: Coelacanth Nutritia, common name Coel, are now different sizes (and give different amount of resources depending on the fish size…gives the rare chance of a super-large catch!)
•Fully Localizable Game Text: Now you can crowd-source translation and dynamic fonts for any language without Modding/TC’s!
•All Current Items added to the Master Items ID array

ARK: Survival Evolved will launch in summer 2016 on Xbox One via the ID@Xbox program, PlayStation®4 with Project Morpheus support, and full release on Steam PC. The game is currently playable in Microsoft’s Game Preview on Xbox One and Steam’s Early Access program, which includes Oculus Rift VR support and an integration of Steam community features such as Steam Economy and Steam Workshop for custom maps and mods. Players can host private/LAN servers and have access to a custom-built version of the Unreal Engine 4 Editor for creating mods. The world of ARK is designed to be modder-friendly and ever-expanding!