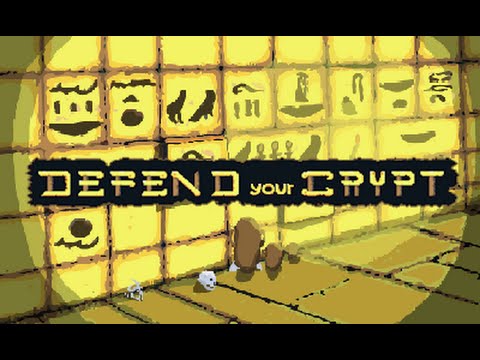 After launching our first title on the Nintendo Wii U, we’re now ready to break out into the portable market on the Nintendo 3DS. After several months of development and some troubles along the way, we can now say that Defend your Crypt will go live on July 21st. It will debut on the Nintendo eShop for both platforms, in North America as well as Europe.

In addition to the Nintendo eShop, Defend Your Crypt will be available on the same day on PC via Steam in a package that includes the game, the original soundtrack, and a few extras.

Below are our gameplay trailer for 3DS:

Defend Your Crypt is a strategy and puzzle game in which the player will have to defend his treasure from the tomb thieves. The player, as the Pharaoh, can use different traps to defeat the pesky robbers who are profaning his tomb.

Make them fall into the void, burn them, put an arrow through them, drown them, send your scorpions to kill them… Do everything you find necessary to end their lives.

– Retro style: Like many of our games, Defend Your Crypt will have retro pixel art. In addition, we will lean toward an Egyptian style.

– Trap variety: The game classic traps such as open platforms, which can make robbers fall on spikes, and also water traps or killer scorpions and beetles.

– Gore: At Ratalaika Games, we know you like blood, so we have included it. A lot of it. Killing the robbers won’t be enough. ”If it bleeds, we can kill it”, and we’re taking it to the limit. (If you don’t like blood, you can deactivate it :P)

– Levels: A large number of levels to make sure that the robbers will not steal any of your gold, and that you enjoy the game to the fullest. A lot of time can be spent on finishing all of them!

– Robbers with feelings: Robbers have feelings too! Throughout the game, players will see robbers in different moods, and they will also interact with each other a little bit. Seeing a hallway full of blood could make a robber sad and break his heart.