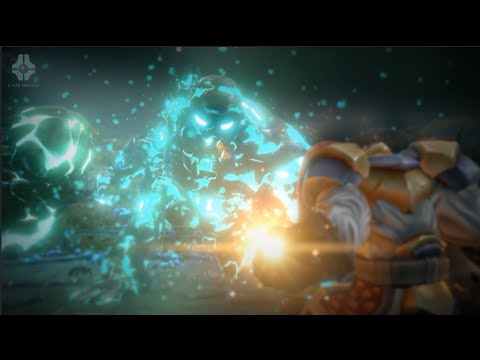 Betadwarf, imgur internet sensation and indie developer from Denmark, are well on track to releasing their deck-building, twin stick, rogue-like, Forced Showdown on March 29th, 2016 on Steam (Windows). JUST AS THEY ANNOUNCED LAST MONTH! Such are the wonders of Danish indie development.

Steffen Kabbelgard, a random person chosen to represent the game based on his good looks, said:
“After the success of Forced in 2013, we got over-enthusiastic and started development of a new and different type of Forced game. Two years later we are very close to the finishing line and really can’t wait to show players what we have built! And we would very, very much like to get some sleep again.”

Forced Showdown is a modern mash-up of a top-down, twin stick action rogue-lite that combines the strategy of a deck-building card game. Players take control of one of four gladiators in a Galactic Game Show hosted by the Computer-Simulated Arena Referee (C-SAR) to win the approval of the crowd and become the Galaxy’s favorite. It’s a kill or be killed affair where winners become famous and losers get eaten by titans.

It has the bestest features:

•Each champion has their own unique weapon and special abilities. Unlock their true potential by exploring and extending their possibilities with cards.

•Build the perfect deck of cards to enhance the abilities of your champion.

•Hone your skills in campaign mode then compete in the daily challenges to see who is the most dangerous gladiator this side of the galaxy. New seasons every month!

•Companion creatures can help you overcome the dangers of the arena with their extraordinary abilities.

•C-SAR has ensured a great host of varied enemies, all with unique fighting styles and skills. Slay the mighty Titans and win the adoration of the spectators.