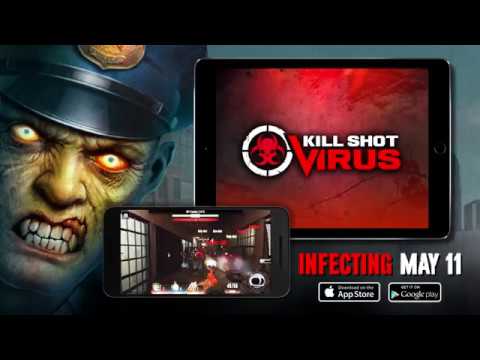 Hothead Games, the developer and publisher of top-grossing shooter games on mobile, announced today the upcoming release of the creepiest, most vivid zombie shooter game on mobile, Kill Shot Virus.

The third installment of the company’s adrenaline-fueled Kill Shot franchise will be available for iOS and Android devices on May 11th.

In Kill Shot Virus, a zombie outbreak threatens to infect all of humanity. The only hope of saving mankind from mass extinction is for players to take out the zombies with a heroic mix of high-powered guns and sharpshooting mastery. Featuring the heart-racing First Person Shooter (FPS) action and intense graphics that have become the franchise’s trademark, Kill Shot Virus takes it up a notch and introduces more up close and personal shotgun and assault missions. Also new Urban Onslaught and Urban Pandemic event modes have been included to take the FPS genre to another level.

As survivors of a terrible apocalyptic event, Kill Shot Virus players are expected to save mankind by using deadlier guns, more sophisticated gear, and more social gameplay than any other shooter game on mobile. The game will include exciting features such as:

•Play through 100+ adrenaline-pumping first person shooter missions to prevent the spread of the zombie virus
•Terrorize the Undead up close and personal with a huge arsenal of Assault Rifles, Shotguns, Sniper Rifles and Machine Guns
•Push the limits with stunning next-level graphics showcasing the zombie-infested chaos and infected city
•Fight and overcome hordes of zombies including Screechers, Jumpers, Exploders and other horrible types of zombie monstrosities
•Get decked out with a wide variety of bad-ass gear to survive the zombie invasion
•Create a survival faction and obliterate the undead together while climbing the Leaderboards