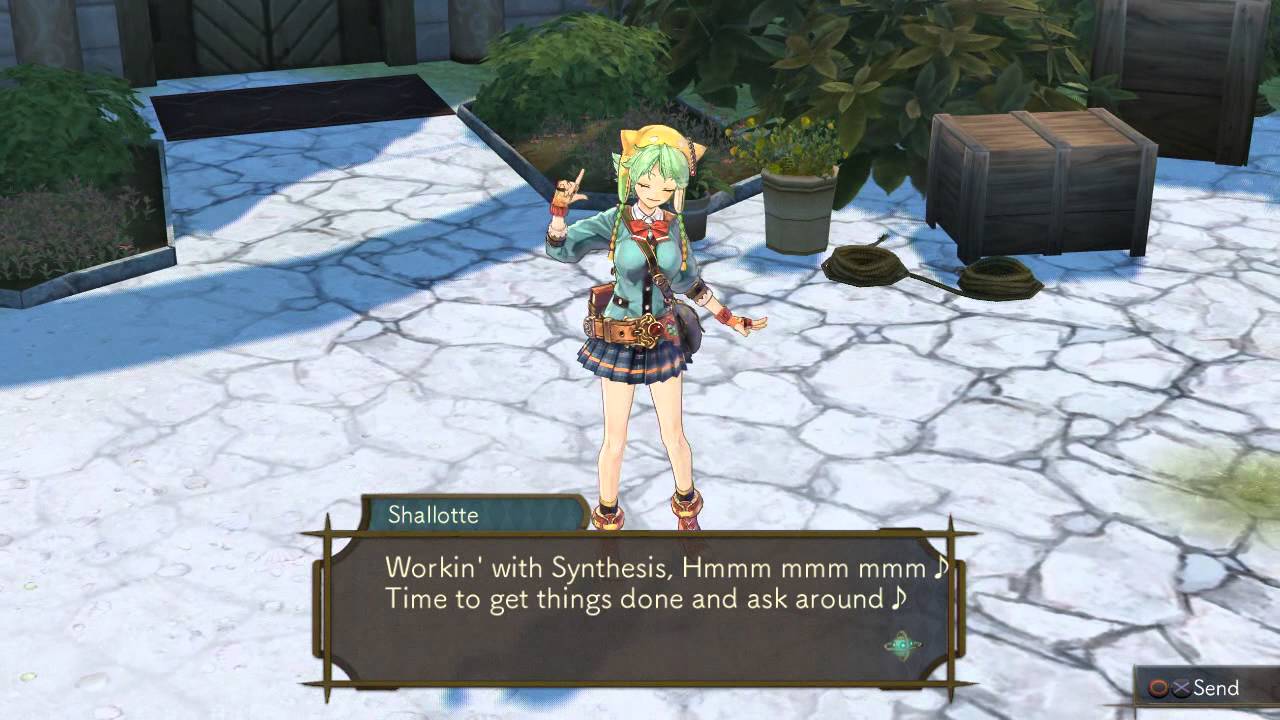 Koei Tecmo Europe released today a bundle of new information, screenshots and videos relating to Shallotte, one of the two protagonists of the final chapter of the Atelier Dusk series: Atelier Shallie: Alchemists of the Dusk Sea, which will be available across Europe on 13 March 2015 on the PlayStation®3 computer entertainment system.

Shallotte Elminus, called Shallie by her friends, is a poor young alchemist with big dreams. She spends her days running her deceased father’s small Atelier and doing whatever work she or her loving mother Nady can find for her through her contacts. Though she doesn’t have a lot of experience or knowledge of alchemy she is very keen to learn and she spends a lot of time discovering and synthesising new items.

Luckily, Shallotte’s childhood friend Miruca Crotze is a very good alchemist. She studied in Central city and though this has caused her to develop a colder and more distanced personality she still admires Shallie’s honest and simple thinking. Miruca is a keen researcher and a devoted friend and she always says her opinion frankly, though sometimes this makes her seem a little harsh.

Shallotte will also find a teacher in the face of Wilbell Voll-Ers l ied, a travelling magician who, after she assists Shallie, becomes a role model and an instructor for her. Wilbell is travelling the land of Dusk in search of spirits that offer her powerful magic. Her child-like appearance might fool some, but she is actually quite old and seasoned and provides Shallie with good advice and valuable help.

These are not the only people Shallie crosses paths with in her efforts to become successful. She also has to deal with government officials like Solle Grumman, a hard working young man sent to investigate the town of Stellard and establish a government branch office.

Shallotte must learn to tame her wild and free spirit and work with merchants, like the troublesome Kat l a Larchica who never seems to sell anything that works and rely on treasure hunters like the cool and collected homunculus Homura whose skill with the sword is near unparalleled or the romantic Reyfer Luckberry who searches for the long lost treasure of a famous pirate.

By learning how to apply the knowledge and skills of those around her and win their assistance, Shallotte will embark on a journey to adulthood and focus on her ongoing effort to eventually become the alchemist she always dreamed of being.

KOEI TECMO also revealed a number of exciting DLC bonus items, available to those who pre-order Atelier Shallie: Alchemists of the Dusk Sea. Specifically, those who pre-order through GAME & Amazon will receive a Colseit costume for their leading lady fashioned after that of Escha Malier- the protagonist of Atelier Escha and Logy- and a compilation of music from the game. Those who prefer a more summer attire for Shallie can pre-order the Limited Edition of the game from store.nisaeurope.com or selected Independent Retailers for a Flower Pareo costume and a compilation of music from the game as an extra bonus. Finally, for pre-orders through ShopTo.net or the PlayStation Network will receive a special Atelier series selection of music and a Passion Dress.

You can also view the videos on our YouTube Channel:

About the Game:
Atelier Shallie: Alchemists of the Dusk Sea closes the Atelier Dusk trilogy which was preceded by ‘Atelier Ayesha: The Alchemist of Dusk’ and ‘Atelier Escha and Logy: Alchemists of the Dusk Sky’. The Dusk trilogy is set on a backdrop of a world slowly coming to its end; a world in the dusk of its life.
As with ‘Escha and Logy’, In Atelier Shallie players can chose to play as one of two main characters: either the reserved, mission-focused Shallistera or the energetic Shallotte. This dual main character system has been improved significantly with the addition of separate stories and multiple endings for both Shallistera and Shallotte.
For the first time in the Atelier series, Atelier Shallie: Alchemists of the Dusk Sea will include a 360 degree camera, giving players more freedom as they explore a vast world map that has expanded greatly.