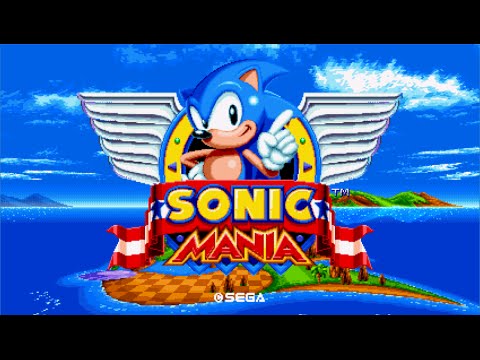 Sonic celebrated his 25th anniversary at a sold out event on Friday evening during San Diego Comic-Con held at the House of Blues . Today SEGA ® revealed two new Sonic The Hedgehog™ titles: Sonic Mania and an untitled original game for release on console and PC in 2017.

Sonic Mania brings fans back into the 2D world of platform games with nostalgic pixel-style art and core classic gameplay by reimagining iconic Zones and Acts from Sonic The Hedgehog, Sonic The Hedgehog 2, Sonic CD and Sonic The Hedgehog 3 and Knuckles, and adding in completely new Zones with all-new Acts, and bosses into the mix. Developed by SEGA of America and in collaboration with PagodaWest Games along with Christian Whitehead and Simon Thomley, the game will be available for digital release in Spring 2017.

“Sonic Mania was born out of our fans’ love of the classic Sonic 2D platform games,” said Takashi Iizuka, Head of Sonic Team. “This type of collaboration is a first for SEGA and we hope everyone will be both surprised and delighted by this title. Sonic Mania has been a passion project for the entire team and we look forward to sharing more details about it later this year. Having the game actually playable at the event itself tonight was testament to the dedication of the team behind it.”

Also, another original title was revealed at the end of the party. This epic title is being created by the Sonic Team, the same team that brought fans Sonic Colors and Sonic Generations. Available at retail and digital stores for Holiday 2017. Additional information will be revealed at a later date.

“Today brought thousands of fans together from all over the world to get a look at all the facets of our beloved Sonic the Hedgehog from his foundation in video games to music, TV, mobile, toys, fashion and beyond,” said Ivo Gerscovich, Chief Brand Officer of Sonic Pillar and SVP of SEGA of America.“ This is only the beginning for Sonic and we’re happy our fans were here to celebrate this exciting new direction.”

Additionally it was revealed that the hit mobile game Sonic Dash has been downloaded over 200 million times. To celebrate Sonic’s anniversary, Sonic Dash has a special in-game event that includes the Green Hill Zone and Classic Sonic as a playable character. The event will last one week in which players can unlock the Green Hill Zone and Classic Sonic to continue to play with after the event is over. The game is free to play with optional in-app purchases, and is available on the App Store, Google Play, Amazon Underground, and Windows Phones.

Lastly, Sonic Boom, the hit animated television series, now airing in over 100 countries, was announced for season two. Attendees at the event were treated to a sneak peek at what’s to come for this celebrated action/comedy series. More information about the non-stop adventures starring Sonic and his friends will be announced at a later time. Fans of the show won’t have to wait too long for Sonic Boom: Fire and Ice, the Nintendo 3DS game based off of it. The game will be launching on September 27th in the US and on September 30th in Europe.