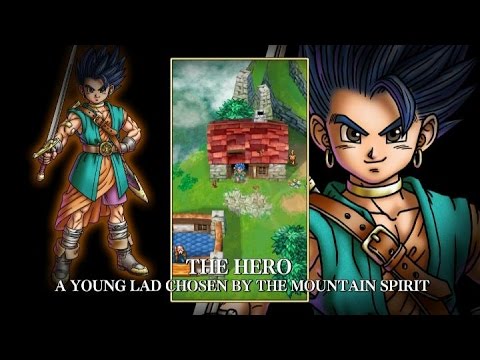 SQUARE ENIX® today announced that the classic role-playing game (RPG), DRAGON QUEST™ VI: Realms of Revelation®, is now available on compatible iOS and Android devices. Players will set out on an epic adventure spanning two parallel worlds, where they must join forces with a diverse group of characters in order to save the world from darkness.

DRAGON QUEST VI: Realms of Revelation is the final chapter of the Zenithian trilogy, concluding in an expansive quest of a young Hero who sets out to learn the truth about his world and the mysterious phantom realm that lies beneath. Journeying across a vast and dangerous land, players must confront the Hero’s destiny and recover his long-lost memories in order to unite and save the two worlds.

Key features in DRAGON QUEST VI: Realms of Revelation include:

● Loyal Companions – On their travels, players will recruit a following of faithful friends in the riven realms, from wandering warriors to amnesiac teens. Faithful companions can be instructed to fight to bring down even the toughest enemies with ease.

● Master of Abilities – Heroes and their companions can complete vocational training at Alltrades Abbey to learn and master a multitude of spells and special abilities.

● The Slimopolis – Players can recruit, train and battle slimes in the Slimopolis to test their mettle in a series of arena battles with fabulous prizes on offer for any slime tough enough to emerge victorious.

● Slippin’ Slime – For a break between battles, this slime-sliding mini-game challenges players to maneuver around perilous pitfalls and obstinate obstacles.

● The Casino – Players can try their hand at the poker tables and slot machines and exchange tokens for rare and unique prizes.

With its simple and intuitive controls that work perfectly with the vertical layout of mobile devices (facilitating both one and two-handed play), DRAGON QUEST VI: Realms of Revelation also allows players save at any time through the Quick Save function allowing players to rejoin the action right where they left off. In addition, the title includes work from the legendary trio of creators – Master Creator Yuji Horii, revolutionary Music Composer Koichi Sugiyama and Art Director Akira Toriyama – setting forth a truly stunning and thrilling tale.

The new launch trailer can be viewed on YouTube: http://youtu.be/FfUB0FRMZjQ.

DRAGON QUEST VI: Realms of Revelation is now available for $14.99 on iPhone, iPod touch and iPad and Android devices. For more information on the game , visit the official website: http://www.jp.square-enix.com/dqsp/dq6/en/ .