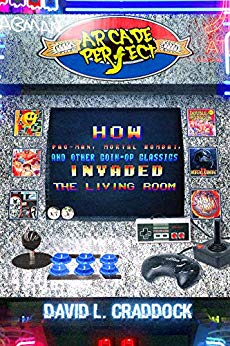 Press Start Press announced the release of Arcade Perfect: How Pac-Man, Mortal Kombat, and Other Coin-Op Classics Invaded the Living Room in paperback and for all Amazon Kindle e-readers and apps.

Written by David L. Craddock, Arcade Perfect tackles the largely unexplored topic of adapting groundbreaking arcade games such as Donkey Kong, Ms. Pac-Ma, and Teenage Mutant Ninja Turtles to consumer formats such as cartridges and CD-ROM. “I had forgotten how hard it was for developers to convert an arcade game to home consoles, and David captures that era in vivid detail,” says Tom Kalinske, president of Sega of America during the “console war” between the Super Nintendo Entertainment System (SNES) and Sega Genesis. John Tobias, co-creator of the blockbuster Mortal Kombat franchise, describes adapting arcade games to home consoles as an “art,” and a “crucial yet overlooked” era of the multibillion-dollar videogame industry. “David’s book sheds light on the stories of some of the biggest games that made that transition and is a must-read for anyone looking to understand the process.”

“Rather than copy press releases designed to turn business executives into heroes, David steps into the trenches to share the stories of the people who brought our favorite games into being,” says Jennell Jaquays, director of game design at ColecoVision creator Coleco Industries from 1982 through 1985.

Adam Bromell, co-creator of indie sensation Astroneer, praises Arcade Perfect as a time capsule that reveals the turbulence and financial strain that marked the early days of the games industry. “When I smell pepperoni pizza, I can hear ‘GET OVER HERE!’ and ‘BOOM-SHAKKA-LAKKA!’ vividly,” says Bromell, who grew up feeding quarters into Mortal Kombat and NBA Jam in a local pizzeria. “It was wonderful to read about the work that went into those games, and it’s something I never considered until Arcade Perfect.”

“I don’t know of another book that focuses on arcade ports—it’s unique and I had a blast reading it,” says John Romero, co-founder of id Software and co-creator of Doom and Quake.

Arcade Perfect: How Pac-Man, Mortal Kombat, and Other Coin-Op Classics Invaded the Living Room is available now on Kindle for $9.99, and in paperback for $29.95.

About David L. Craddock
David L. Craddock writes short and long fiction, nonfiction, and grocery lists. He is the author of the bestselling Stay Awhile and Listen series charting the history of World of WarCraft and Overwatch developer Blizzard Entertainment and Diablo/Diablo II developer Blizzard North, and the critically acclaimed Gairden Chronicles series of epic fantasy novels for young adults.