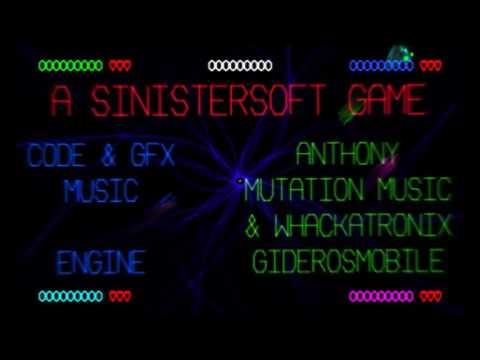 Bacteria™ Arcade Edition from SinisterSoft is has been completely re-coded and now uses vector and particle graphics and has great new music tracks.  Bacteria™ was created and programmed by Anthony Ball, a veteran games creator from the late 80’s/early 90’s.

Originally coded 3 years ago, game is a mashup of classic arcade games like Defender and Asteroids.

The basic idea is to stop multiple waves of alien bacteria from snatching your last few remaining cells that are located around the middle of the screen. However, there are also some bacteria who are intent on destroying you – so you must destroy them first. If you succeed in surviving the level then you will be rewarded with a further cell to protect on the next level, and so on…

The game starts off slowly, but by level 4 the game is frantic, lots of chaotic action that keeps you on your toes.

The game is even more fun when played in multiplayer mode, surviving the level brings your friends back from the dead!

Two player simultaneous action: For touch screen devices Bacteria features a cocktail mode where the players control face each other.

Four player simultaneous action: For Android and Kindle Fire TV devices, up to 4 players using the remote or joypads cooperate to save the cells and defeat the invading bacteria.

The game is completely free and available now on the Play and Amazon stores.