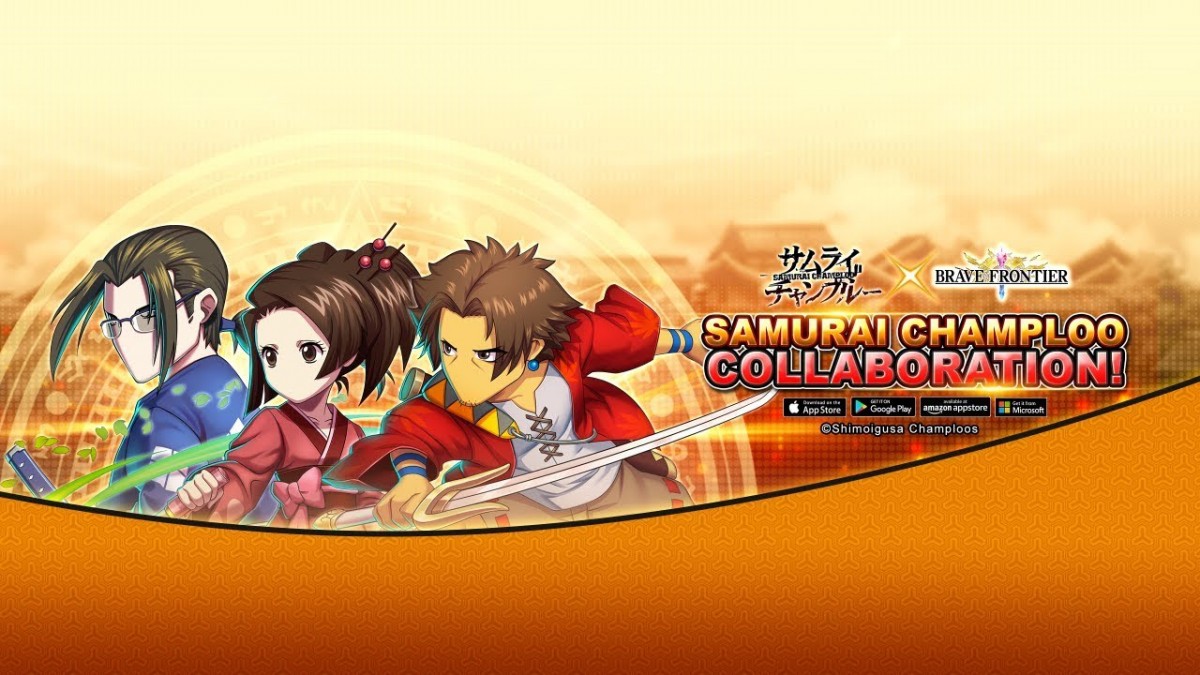 gumi Inc. announced the arrival of SAMURAI CHAMPLOO in BRAVE FRONTIER. From Nov 20th to Dec 11th, 2019, Summoners can look forward to summoning their favorite SAMURAI CHAMPLOO characters and collecting various rewards available during the collaboration.

Below, we have listed the highlights of what Summoners can expect from this collaboration:

Meet your favourite SAMURAI CHAMPLOO characters as they make a surprise entrance to the world of Grand Gaia to join Summoners in battle!

7★ Samurai Champloo Unit Summon:
Summoners may obtain Mugen and Jin from the Special Collaboration Summon Gate for a limited time. These Units will be available in their 7★ forms and can be evolved into their Omni forms.

SAMURAI CHAMPLOO characters who will be making a special appearance are:

DBB is a Skill Type that can only be used by specially selected Units that are known to be “Bonded.” Bonded Units join together to perform their DBB during combat that unleashes a mighty power, an Elemental Synergy, in addition to their combined Ultimate Brave Bursts.

SAMURAI CHAMPLOO Collaboration dungeons
Dungeons are available for Summoners to look forward to as well!

Samurai Champloo Adventures (Available from Nov 21st to Dec 4th)
Mugen, searching the forest for something to eat, comes across a strange mushroom like the one he had with Fuu and Jin. He eats it, passes out, and wakes to see the Summoner and Jin in front of him. Jin informs him that Fuu and himself found the Summoner taking care of Mugen. Fuu, who went to get water for Mugen, has yet to return. Fearing she might have been kidnapped again, Mugen and Jin decide to split up and look for her.

Summoners can obtain event tokens by clearing these missions. These tokens can be used at the SAMURAI CHAMPLOO Bazaar to exchange for rewards.

Lethal Lunacy (Available from Dec 4th to Dec 11th)
With all the evidence pieced together and the ominous full moon drifting over the forest, Mugen and the Summoner manage to find the risen corpse of Shoryu waiting for a rematch. Shoryu has a strong chi that preserved his body from rotting and thanks to a wasabi root, has been resuscitated. Driven by his desire to become the strongest among martial users, he challenges Mugen and the Summoner.

Summoners can obtain event tokens by clearing these missions. These tokens can be used at the SAMURAI CHAMPLOO Bazaar to exchange for rewards. In addition, Summoners will obtain Shoryu upon completion of this Event Dungeon.

Sunflower Collection (Available from Nov 21st to Dec 4th)
Fuu’s perspective: Hoping to be more useful to her traveling companions, Fuu sets off in search of water, but can’t help but think about the mushrooms Mugen said he ingested. Did he really find matsutake, also known as the “Jewels of the Mountain”? Can she make a huge profit if she finds enough of them? Unfortunately, trouble seems to follow Fuu everywhere.

Summoners can obtain event tokens by clearing these missions. These tokens can be used at the SAMURAI CHAMPLOO Bazaar to exchange for rewards.

Gather all your event tokens from clearing the BRAVE FRONTIER x SAMURAI CHAMPLOO dungeons and exchange them for even more rewards! Do not miss your chance to get the exclusive collaboration Units—Fuu and Shoryu.

The Bazaar will be available from Nov 20th to Dec 11th.

It’s the final fight to decide the ultimate martial artist! Even death could hardly put a damper on Shoryu’s obsessive pursuit of glory. Let your skills do the talking as you put this madness to its final rest!

Note: Clearing either of these missions under the “Lethal Lunacy” dungeon will count toward the total number of clears required for the milestones.

Gather your fellow Summoners and reach the milestones together to earn impressive prizes.