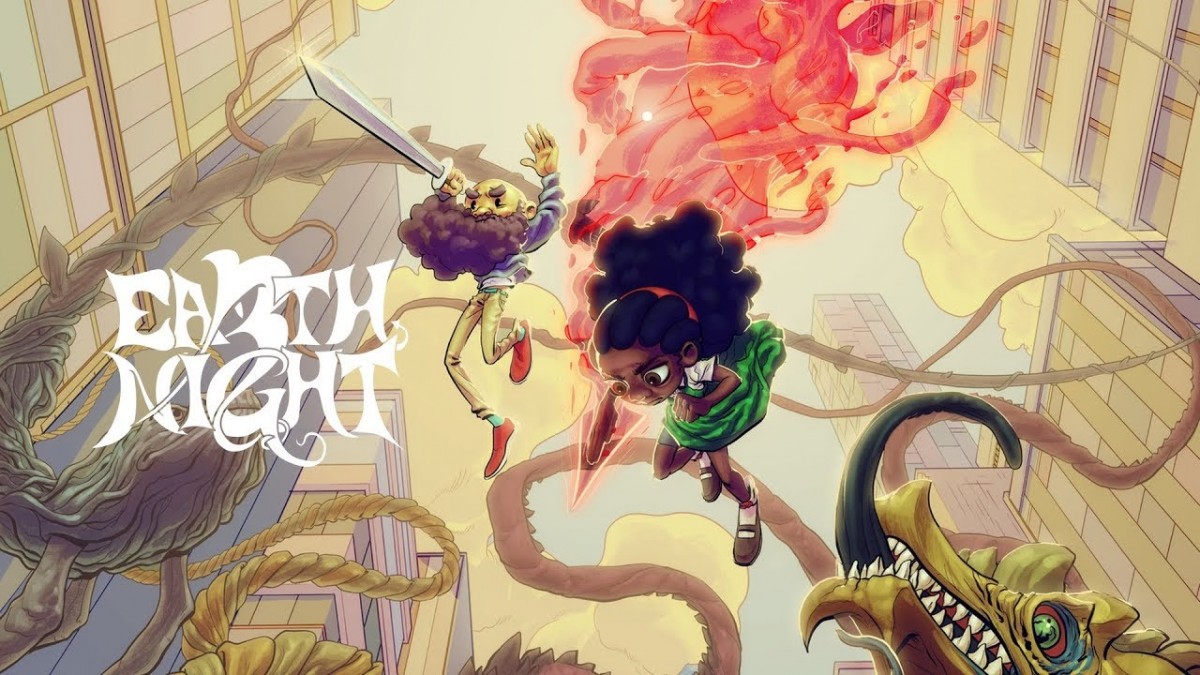 EarthNight, the hand-drawn action platformer set during the dragon apocalypse and featured in Nintendo’s Indie World presentation earlier this year, makes the jump to Nintendo Switch, PlayStation 4, and Steam for Windows PC and Mac on Dec. 3, 2019.
Cleaversoft‘s console and PC debut casts Stanley and Sydney as humanity’s last hope. Ever since dragons overtook Earth, mankind has lived in exile on space colonies orbiting the planet. Despite being faced with seemingly insurmountable odds, the unlikely duo—a sword-wielding freelance photographer and a young student blessed with ethereal superpowers—take it upon themselves to reclaim their home by skydiving through Earth’s atmosphere and striking back against the monsters below.
The two heroes approach their dragon-slaying mission with drastically different tactics. Stanley’s powerful legs allow him to make both high jumps and long leaps, while Sydney favors agility by making use of an air dash and double jump ability. Both heroes wield their bespoke skills to overcome hostile environments and push towards the vulnerable heads of their scaled serpentine foes.
Each EarthNight level features procedurally-generated dragons with multiple exits and secrets rewarding exploration. Slaying dragons grants Sydney and Stanley rewards like dragon eggs and other mysterious objects that unlock powerful upgrades. With the right tools, the duo can topple even the toughest opponents while moving through stages at breakneck speeds.
Boasting more than 10,000-plus frames of painstakingly crafted animation, EarthNight’s hand-drawn visuals come from Paul “Mathattan” Davey. Paul “Chipocrite” Weinstein composed the title’s rocking soundtrack, infusing chiptunes created on Gameboy Hardware with real modern instrumentation.
EarthNight launches on Nintendo Switch, PlayStation 4, and Steam for Windows PC and Mac on Dec. 3, 2019 for $14.99 / €13.99 / £12.59 / $21.00 AUD. The game is currently available via the Apple Arcade subscription service for iPhone, iPad, Apple TV, and Mac.