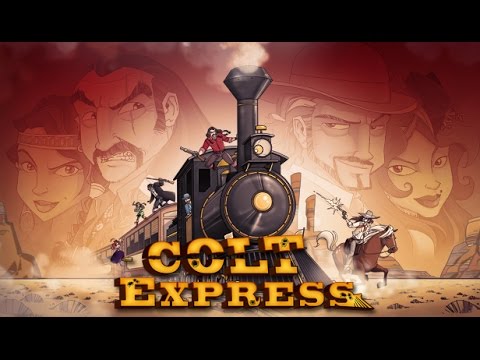 6 Characters, 30 Single Player Chapters, and Online Multiplayer Bring Hours of Fun to the Role of a Train Robbing Bandit in this Turn-Based Strategy Game

Asmodee Digital, an international publisher and distributor of digital games, in collaboration with Frima Studios, a leader in the entertainment and innovation industry, announce that Colt Express is now available for iOS, Android, and PC.

Colt Express is a digital version of the Spiel des Jahres and Ace d’Or award-winning board game which has sold hundreds of thousands of copies worldwide, and players can now pick up the turn-based strategy game on their favorite mobile device for $6.99, or on PC via Steam for $9.99.

Colt Express takes players to the Wild West where they must practice good strategy, with the use of cards, to maneuver around a train to collect as much loot as possible. There’s an extensive single player mode that features six unique bandits, each with their own goals and challenges, and 30 graphic novel stylized chapters – 5 per character. There are also exclusive game variants to unlock in the story mode that drive the train robbing action even further.

Players can also take their train robbing tactics online to compete with other thieves through online multiplayer and worldwide leaderboards that update in real-time. To make playing against friends easier, there is a Friend’s List option that enables users to add others to their list so they can choose to challenge them at anytime, anywhere. “We’re thrilled to bring the wild west to mobile and PC gamers with the release of the new digital version of the award-winning Colt Express board game.” said Remi Hanesse, Product Manager at Asmodee Digital. “We can’t wait for digital outlaws to start scheming their way to lots of loot in the game’s extensive single player story mode and online multiplayer mode.”

Description
Colt Express, the famous train robbery game and Spiel des Jahres winner, is coming to digital. In Colt Express, players plot step-by-step actions with cards that move them around the train, take down other players, and pick up loot. After the scheming phase, dive into the action to take the most loot from the wagons. There is not enough for everyone, and a marshal is guarding the train so soon enough, bullets do the talking. Players must rethink their strategies on the move in this fast-paced game. Playable solo or with friends worldwide in multiplayer.

Key Features
A wild west-themed universe, inspired by the original board game and digitally modernized
Tactical and action-packed gameplay, for intense and unpredictable games
An extensive story mode: follow 6 characters through 30 chapters, each with their own goals and features
Many exciting and exclusive game variants to unlock in story mode
Online multiplayer mode with an exclusive to digital rules variant
Worldwide leaderboard, updated and available in real-time
A friends list that allows challenges anytime, anywhere