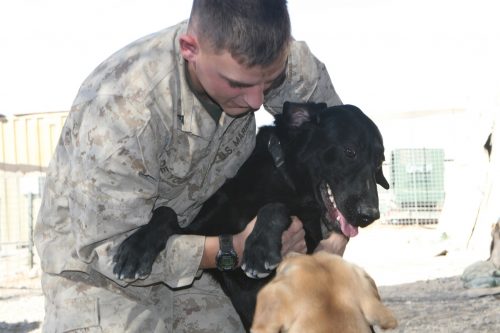 U.S. military hero dog Cena, a 9-year-old Black Labrador who served as a bomb detection dog in Afghanistan and saved the lives of his handler and uncounted other American warriors, ended his service to Mankind today after a battle he could not win with bone cancer. Cena died peacefully in the arms of his battle buddy, former United States Marine Corps Corporal Jeff DeYoung, in their hometown of Muskegon, Michigan. The two first met during Improvised Detection Dog training in Virginia in July 2009. They were deployed to Afghanistan later that year and during their service together, the two were part of Operation Moshtarak in February 2010 that was the largest joint operation up to that point. Corporal DeYoung and Cena typically led the way as U.S. troops trudged through the rugged and treacherous sandscapes of Afghanistan. Cena was trained to detect more than 300 different types of explosives and if he smelled something suspicious on patrol he alerted DeYoung, who would then call in an explosives technician to safely remove or detonate the bomb.

Cena and DeYoung ate together, slept together, and fought together, forging a deep bond between them. “Once I laid down on top of him to protect him from gunfire,” said DeYoung. “I carried him through a freezing cold, flooded river on my shoulders.”

DeYoung’s protectiveness of Cena was repaid many times over. Each military dog is estimated to save the lives of between 150-200 servicemen and women during the course of their career, and one of those lives was DeYoung’s. Suffering from Post-Traumatic Stress and the recent loss of several close comrades in combat, DeYoung decided to take his own life. Cena intervened and saved his comrade from committing suicide.

Despite their seemingly unbreakable bond, Corporal DeYoung and Cena were separated unceremoniously without even the chance for a goodbye when DeYoung left military service and Cena continued working through three deployments. For four years, DeYoung suffered nightmares and flashbacks, missing Cena every single day. Finally, when Cena was retired for a hip injury, the two were brought back together in an emotional reunion made possible with the help of American Humane, the country’s first national humane organization, which has also been working to support the U.S. military, veterans, and military animals for more than 100 years. The reunion in 2014 was covered by media across the nation and Jeff and Cena’s story has been carried in hundreds of countries around the globe.

Since then, Corporal DeYoung and Cena have served as military ambassadors for American Humane, traveling around the country to raise awareness about the importance of reuniting service dogs with their handlers, and how the dogs can improve and save the lives of veterans with Post-Traumatic Stress.

“Military Working Dog Cena is a true American hero and an inspiring testament to the life-changing power of the human-animal bond,” said Dr. Robin Ganzert, president and CEO of American Humane. “He will be greatly missed by all those who knew and who owe their lives to him. His work and his example will live on in the memories of all who knew him and were touched by his story.”

“Cena was family to me,” said DeYoung. “It’s always been him and me against the world, and losing him has devastated me to my core. Goodbye, my most faithful friend. I will never forget you.”