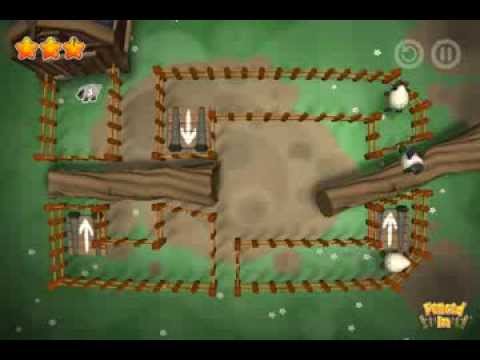 Jelly Republic is proud to announce the release of Fenced In 1.0 for iOS. Fenced In is an arcade puzzler in which you help Farmer Grady fence in his lost animals. The player fences the animals in using a novel fence drawing mechanism.

Players will need to carefully plan where and more importantly when to draw their fences in a race against the clock to gain as many stars as possible. However if the player isn’t fast enough, and an animal hits a fence mid-draw, then the player loses a star.

The initial levels are simple while the player learns the basic mechanics. Pretty soon there are obstacles like streams and rocks, bouncy tractor tyres and much more! Later levels have jump pads that throw animals over fences/obstacles and even red barns to help pen animals in.

The levels are a mix of frantic fence drawing and tactical challenges where 1 or 2 strategically placed fences will make all the difference. There is great replayability with players going back and refining their strategy in order to collect all the stars and get the perfect score.

The game itself is beautifully rendered, squeezing every last inch of power out of iOS devices. The game is family friendly; younger children will have lots of fun with the cute farmyard animals and will be able to complete all of the levels albeit with a lower star count. Adults on the other hand will have just as much fun grappling to achieve those pesky 3 star ratings and even competing against friends on the leaderboards via Game Center.

Fenced In is available on the Apple App Store for 69p. It is released as a universal app.