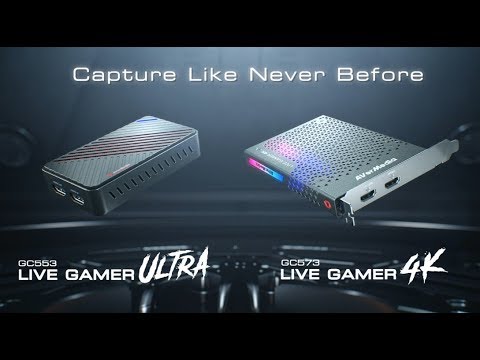 4K and 4K HDR video is a rising trend in gaming, both on PC and 4K-capable consoles such as the Xbox One X and PlayStation 4 Pro. Thanks to 4K and 4K HDR graphics, players can see details that bring action to life, making gaming more immersive. With both new AVerMedia cards, games and influencers can capture at full 4K resolution, including HDR, or choose to play in Full HD with insanely high frame rates (up to 240 frames per second). The affordable pricing of the Live Gamer 4K UHD line, which includes the recently released Live Gamer EXTREME 2, lets streamers who aren’t yet uploading at 4K “future proof” their rig without breaking the bank.

“The Live Gamer 4K and Live Gamer ULTRA empower gamers to capture and stream their greatest moments in stunning 4K HDR and 4K, respectively, with no impact on gameplay responsiveness,” said David Kao, Marketing Director of AVerMedia. “Gaming is increasingly becoming a 4K medium and these Live Gamer cards provide entry to a new world of incredible clarity and realism, including the ability to play in 4K HDR while capturing.”

The internal PCIe Live Gamer 4K is perfect for gamers with a powerful desktop PC for gaming or standalone capture from a 4K High Dynamic Range (HDR) PC or console, providing the ability to capture at the very highest resolutions and frame rates. HDR, previously only available via expensive professional capture cards, provides more accurate color and greater contrast ratio along with the increased resolution provided by 4K (3840 x 2160) at up to 60 frames per second.

The external Live Gamer ULTRA, on the other hand, provides a solution for laptop users and streamers on the go, allowing ultra low latency capture over USB 3.1 with a small footprint. Its driverless setup ensures the card is immediately recognized when it’s plugged in, and while it can’t capture in 4K at 60 fps like its big brother, it can still capture at 4Kp30 and at 120 fps in 1080 HD when paired with a laptop or PC that can handle the throughput. It also supports HDR passthrough, allowing gamers to play and view HDR while recording in standard 4K, and its onboard video processing helps lighten the computer’s CPU load.

The Live Gamer 4K and Live Gamer ULTRA cards are now available at retail and online, and include AVerMedia’s proprietary RECentral software that supports simultaneous streaming to Twitch, YouTube and Mixer from a single app, and CyberLink’s PowerDirector 15 video editing software, which supports 4K video.