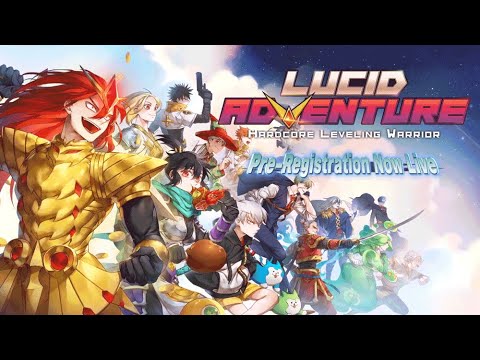 Mobile game, ‘Lucid Adventure’, has been released on Apple App Store and Google Play Store. App itself is free to play and is available to download from both stores. ‘Lucid Adventure’ services worldwide and supports 4 languages including English, Japanese and Chinese (traditional and simplified).

‘Lucid Adventure’ is a 2D action RPG that anyone can easily play and also can experience its great adventure with attractive heroes. Major game system is to strategically form up a party with 4 characters, then battle against incoming monster waves and complete the story quests. Not only the stories but there are various amount of other contents that players can enjoy, such as Nightmare Invasion, PvP Arena, Dungeons, Relics and etc.

You can play ‘Lucid Adventure’ at anywhere through mobile devices. Experience thrilling battle and have endless joy of getting stronger!

Challenge other players in the world. You need to setup 2 groups strategically for attack and defend purpose in arena.. The strategy you form up the party directly affects your ranking. Whoever grabs the first place of the season will be listed on ‘the Hall of Fame’ globally. Become a legend and make your name to be remembered forever.

If you are looking for someone to play with until the end of the game, Guild is the perfect system for you. Collect APs(Resources in Lucid Adventure) through ‘Campfire System’ with guild members. Enjoy chatting and sharing the adventure experiences with them.

‘Hohoians’ will present tribute to you. They will work for you 24 hours even if you are not playing the game. Tribute includes golds, enchant scrolls and relic pieces. Relic pieces are used to upgrade Relics and it is especially useful to the players. So don’t forget to be thankful and collect whenever it is ready.