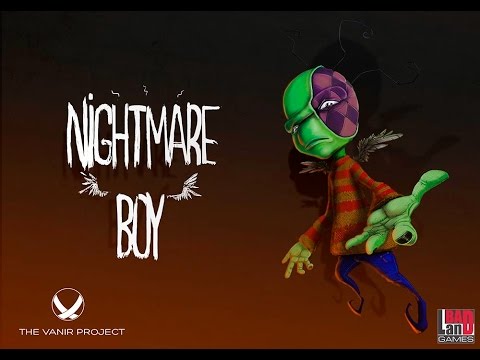 After two years in development, the title created by The Vanir Project appears at last on PlayStation Store, Xbox One and Windows PC. Nightmare Boy will put you in the shoes of Billy, turned into the mysterious Rolo, who must survive his worst nightmares… and the bad dreams of other ten kids, also trapped in the same dark world.

Each rescued kid will give Billy a new power that will help him survive that nightmare world; also, the other kids lost in their nightmares will add their own stories to the storyline, with a glympse of the seamy reasons why they’re trapped there. The player will have to wonder which are those dark reasons…
Nightmare Boy mixes cartoon visuals with classic 2D pixel art. Every asset in the game has been crafted by hand by Juan Garcai, a visual artisan, graphics designer from The Vanir Project. The game mixes adventure, exploration and platforms, and adds some classic “Metroidvania” mechanics: big scenarios, splitted into different zones, most of them only accesible after getting the appropriate weapon or item. The Vanir Project has added a new element to the mix: you’ll have to spend gems collected during the game in each save point, rewarding the boldest players while punishing the ones that saves all the time.

The game by The Vanir Project mixes a graphic style reminiscent of the golden age of arcade games, a storyline suitable to all public, with plot twists only adults will understand, and platforms, exploration and “Metroidvania” mechanics. Nightmare Boy soundtrack has been composed by Vic Hernand, musician and composer with a degree in History and Science of Music with also Production studies on the renowned Berklee College of Music.