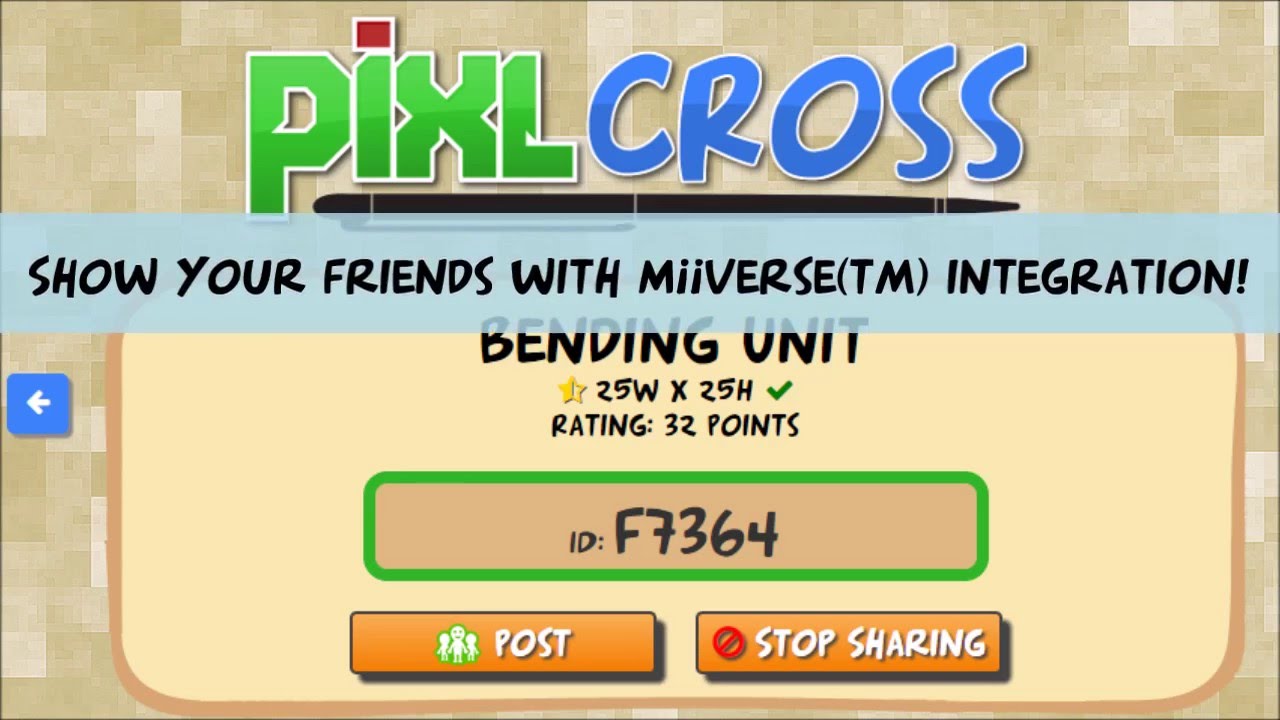 PixlCross, the first nonogram-style puzzle game is now available on the Wii U eShop in North America. PixlBit Studios’ inaugural title, created by husband and wife indie devs Nick and Chessa DiMola, brings a cheery, yet challenging addition to Wii U’s puzzle genre. The feature-packed game can be purchased for the low price of only $5.99.

PixlCross, like Picross, has players leverage hints to fill in a grid and reveal a hidden picture. Boasting more than 150 puzzles across four levels of difficulty, players start by solving puzzles on simple 5×5 grids, but can eventually conquer the challenging final puzzles on massive 35×35 grids! Each puzzle, no matter how large, can be solved without guessing – a common frustration for fans of the pen-and-paper puzzles. The built in hint system allows players to compete any puzzle no matter the difficulty. And with the game’s handy auto-save feature, players can start as many puzzles as they want without ever losing progress!

Players can also use the game’s robust editing tool to create challenging and unique puzzles of their own. After creating a puzzle, players can share an ID code on Miiverse™ and other social media channels that will allow friends, family and fellow players to easily download their creations. Once published, PixlCross allows players track the popularity of their shared puzzles. Compete against your friends to create the most challenging PixlCross puzzle in the country!

For gamers without a Wii U system, the Steam Greenlight campaign for PixlCross is still awaiting your “Yes” votes so that it may see proper release on PC, Mac and Linux.

About the Game
PixlCross is a nonogram-style puzzle game (ie Picross) where you use hints to fill in a grid and reveal a hidden picture. Containing more than 150 puzzles and four levels of difficulty, players will solve puzzles on simple 5×5 grids at the start, but by the final puzzle will take on huge 35×35 puzzles.

But don’t worry, you won’t have to solve the big ones all in one go. After each move, PixlCross will save your progress and allow you to jump back in whenever you’re ready. With the ability to use hints when you’re stuck, you can make PixlCross as easy or hard as you want.

Using the mouse on the PC, it’s spectacularly simple to interact with PixlCross. Simply slide along the grid to fill in or cross out grid boxes and solve the puzzle. Pop-out hints, boxes that count as you fill, and auto-scroll make it even easier to tackle even the toughest challenges.

When you’re done solving all of the puzzles in the game, you can hop over to the Puzzle Editor and begin creating puzzles of your own! The editing tool is the same that was used to make the game and will even tell you if your puzzle can be solved without guessing. Those without the creative flair can always enjoy the strengths of the community by downloading puzzles uploaded by others for a never ending PixlCross experience.