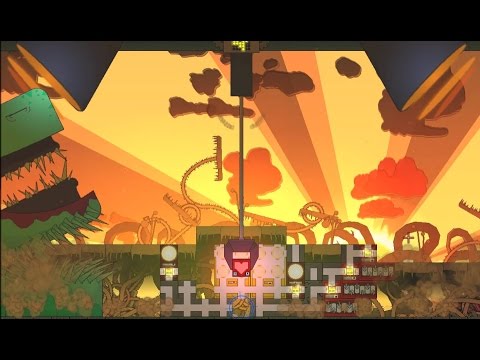 Not long ago, Robots lived in peace on a massive mothership … until one day, they were hit by a gigantic asteroid scattering their Blocks (and more importantly, their

Build your robo-fortress by rotating and strategically placing falling Blocks using a Tetris-like ecosystem. Connect Blocks in different formations to build Robots, such as:

* PewPewBot, which shoots lasers out of its mouth
* LampBot, who lights up the darkest nights
* DwellingBot, an essential Bot that produces four BatteryBots that deliver sweet power to your other Robots

There are even Robots that build Blocks to build other Robots! Make sure to keep everything connected through the Blocks power grid — because even the most energy efficient Robots still need a clear path for a BatteryBot.

The Monsters are incredibly dangerous and come in many different forms. Some have many mouths, and others explode on contact. There are even Monsters that stand on each other’s heads! Some are so massive that they can swallow your base up in one bite! Hurry up and get those defenses ready … because hungry alien Monsters wait for no man, woman or Robot. While Earth’s creatures like to sleep when it’s dark outside, these Monsters like to go “bump” in the night! You’d better build some LampBots; otherwise, you’re not going to see anything after the sun sets.

The following features have been added since the game has been Greenlit:

KEY FEATURES (core game)
*   Drop Blocks to build Robots and pathways, forming an interconnected fortress.
*   Overcome the forces of nature from quicksand to volcanoes.
*   Use your Robots to outmaneuver and outmuscle a wide variety of intergalactic Monsters.
*   Build fun combinations of Robots to automate simple tasks.

All sound effects and voices in Robots In The Wild were created and voiced by lead developer and CEO, Aaron “Heatbox” Heaton.

AVAILABILITY
Robots In The Wild will hit Steam Early Access just short of two weeks (Wednesday, February 15) for $7.99 — a 20% discount off the $9.99 retail price. The sale will end on Tuesday, February 21.

The game is compatible with Windows and Mac.