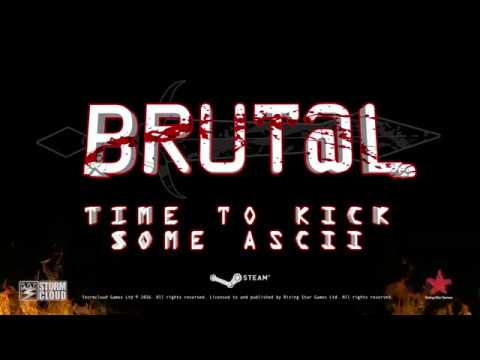 Videogame publisher Rising Star Games today announced that the visually striking and critically-applauded action game Brut@l is available now globally on PC from selected digital retailers. Brut@l arrives with a 20% launch discount. In addition, the physical retail edition will release later in February in the USA.

Brut@l is a re-imagining of the classic ASCII dungeon crawler. The procedurally-generated, co-operative and single-player action game fuses old-school gaming with a stunning 3D visual style. Brut@l is an experience that is inspired by the earliest of videogame adventures, yet feels uniquely fresh and exciting.

Go it alone or buddy up! Play solo to hone your skills and battle against the odds, or share the adventure in local co-op but watch out – if your buddy dies you’ll need to decide to go on without them or sacrifice some of your health to continue together.

Create your dream dungeon! Use the Map Editor to build, play, share and even die in your very own dungeon. Start with a blank canvas or adapt a procedurally generated level with your own flair! Place weapons, furniture, loot, traps and monsters and then share your dungeon with your friends and the world.

Choose your hero class! There are four playable character classes to choose from:

•Amazon – The Amazon uses her variety of ferocious kicks to start and end fights quickly. What the Amazon lacks in force is made up for in speed and agility.
•Mage – The Mage utilizes his staff to blast enemies from a safe distance to devastating effect, while protecting his vulnerabilities in toe-to-toe combat.
•Ranger – The Ranger is a quick and nimble character, able to get in and out of combat swiftly and effectively deal sustained damage to his opponents.
•Warrior – While the Warrior is the slowest of all the classes, he is blessed with having the most health points as well as dealing the most damage.

Enchanting, brewing and crafting! There are five weapon types in Brut@l: short-swords, long-swords, spears, hammers and bows. Each weapon type has a unique special move that can be used to turn the tide in combat.

•Weapon Crafting – Weapons can be crafted by finding a Weapon Codex – basically a blueprint or recipe – and combining it with the required raw materials (ASCII letters).
•Weapon Enchanting – Each weapon in Brut@l has a key ASCII letter that, when replaced with an enchanted letter, can bestow a special ability to that weapon. Engulf your enemies in flames, freeze them in place, poison them, electrocute them or even transform their form!
•Potion Brewing – Potion ingredients are scattered throughout the dungeon, and adventurers can combine these ingredients to brew useful potions to aid themselves, or hinder an enemy! Be careful however, the effects of these potent potions are unknown until consumed or thrown at an enemy.
•Talisman Forging – Talismans are powerful magical relics found deep within the dungeon – wearing these items can bestow special abilities upon an adventurer.

Developed by Stormcloud Games and published by Rising Star Games, Brut@l is available now via selected digital PC retailers with a 20% launch discount off the regular suggested price of $14.99/€14.99/£14.99. The physical retail edition of Brut@l releases in the USA in February.