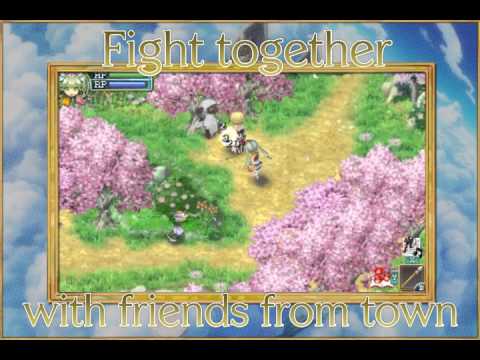 Marvelous Europe and XSEED games today announce that the highly anticipated simulation RPG, Rune Factory 4, is available to download in Europe and Australia on the Nintendo 3DS™ system. It can be purchased exclusively on the Nintendo eShop for £24.99/€29.99 and $49.95AUD respectively.

In addition to this, a launch trailer showcasing the finest aspects of the game is now available to view on Youtube: http://youtu.be/pqT3PUmxVTw

Rune Factory 4 is the latest installment in the critically acclaimed Bokujo Monogatari spin-off series, which revolves around the same addictive life simulation and farming activities that its father franchise, now known as STORY OF SEASONS, is famous for. The Rune Factory series, however, also incorporates classic action-JRPG elements into the mix, all framed in a stunning fantasy setting. Taking place in the Kingdom of Norad, players must fill the shoes of a Prince or Princess and aid the people of a small, picturesque town named Selphia in achieving lasting peace and prosperity.

Created by acclaimed series producer Yoshifumi Hashimoto, Rune Factory 4 is by far the most ambitious title in this storied series. Boasting countless items, crops, weapons and other pieces of equipment to find and grow, as well as a substantial story with richly developed characters, innumerable hours of enjoyment await within the humble confines of this download. Players can farm and find romance among the town’s singles and also explore the wilderness and surrounding dungeons to defeat or tame monsters. It’s a mix of play styles that has garnered well-earned praise both from fans and critics alike.

“It’s been a long time coming, but we are so happy that Rune Factory 4 is now available for all.” commented Steven Tarry, Marketing Manager, Marvelous Europe. “The reception from people since the launch date was announced has been fantastic, and we hope that everyone will enjoy the game as much as we do!”

“Simply put, you’ll never have a shortage of things to do in Rune Factory 4…” US Gamer

“Rune Factory 4 provides an infinite amount of gameplay that doesn’t end once the main story does.” Nintendo World Report

Customise your battle strategy – Use swords, spears, staves plus other weapons, Rune Abilities and more to personalise your battles, and bring friends or even monsters with you into combat for moral and tactical support

Start a passionate romance! – For the first time in series history, players may choose a male or female protagonist, then pursue the dream of a loving wife or a caring husband from among the game’s colorful cast of characters

Take charge of the town – The game’s “Order” mechanic allows players to employ their regal powers to hold festivals, enact sweeping changes and otherwise make Selphia into a town that people just can’t stop talking about