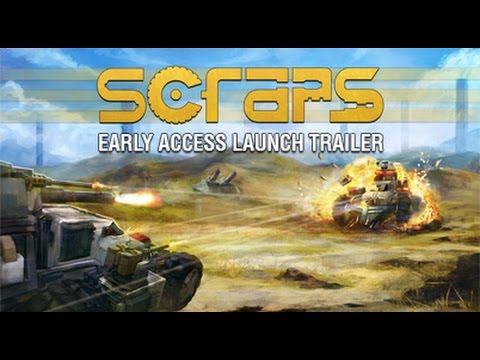 Moment Studio’s Scraps: Modular Vehicle Combat is now available for Mac and Linux! A highly-customizable car combat game driven by realistic physics and enough explosions to make Michael Bay cry, Scraps takes inspiration from Interstate ‘76, Lego Racers, and Stratosphere to deliver platform-agnostic, four-wheel carnage of the highest order. To celebrate this momentous occasion, Scraps can be purchased for a limited time for only $9.75 (Steam Early Access).

Scraps allows players to design the combat machines of their dreams – thanks to its deep vehicle creation system. Armor, weapons, engines, and heat sinks interact with each other and can greatly affect car behavior. Put too much weight on one side, and soon enough they’ll be driving on two wheels like K.I.T.T. in Knight Rider (the original, not the remake). Collecting scraps allows players to purchase upgrades or repair vehicles. New parts – and weapons – can be unlocked with the spoils of war. The game’s memorable vehicular deathmatches can be enjoyed online or via LAN for some old-fashioned fragging.

“I’m pleased to announce that Scraps for Mac and Linux is now a reality!” said Bill Borman, founder of Moment Studio. “It’s taken a bit of work to get this full cross-platform support – particularly as a solo developer – but Scraps can now have Mac, Linux, and Windows users all fighting together in the arena. Let the platform wars begin!”

Key Features
l Create a combat vehicle of your own design, from common sense to “legally insane.”
l Play against AI or human players in single player mode, LAN, or over the Internet. You can also host!
l Make use of functional parts to build your death machine.
l Engage in physics-based madness: You can build a vehicle that moves by firing its guns backwards!
l Work within a budget or experiment with freeform testing.

Pricing & Availability
Scraps: Modular Vehicle Combat is now available for the discounted price of $9.75. The game will return to its original retail price of $14.99 on October 5. Scraps is compatible with Windows, Mac, and Linux.

“Build your own combat car and watch it fail hilariously. After all, that’s at least half the fun.”
Kotaku

“It looks like a vehicular combat game but it’s also something far more important … Scraps is a stage on which to act out physics-based farce.”
Rock, Paper, Shotgun