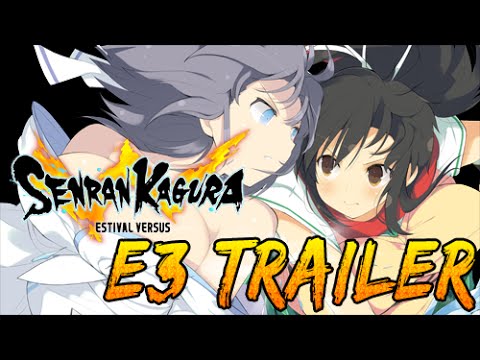 XSEED Games, the independent-minded console publishing brand of Marvelous USA, Inc., today announced that SENRAN KAGURA ESTIVAL VERSUS, the latest iteration and first home console release in its beloved busty brawler series, is headed to Windows PC via Steam®. Slated to release this March, the Windows PC version of ESTIVAL VERSUS will launch with the game’s long-awaited crossover DLC pack featuring characters from the Battle Vixens manga and anime series, also known outside of North America as Ikki Tousen.

Ikki Tousen characters Sun Ce, Lu Bu, and Guan Yu will finally become playable characters as premium DLC across all of the game’s platforms, which include the PlayStation®4 computer entertainment system, PlayStation®Vita handheld entertainment system, and Windows PC versions. The addition of the three battle vixens is sure to spice things up near the one-year anniversary of the game’s console debut.

In SENRAN KAGURA ESTIVAL VERSUS, a mystical phenomenon transports the nubile ninjas of the titular series to a parallel dimension to face off against their rivals in a new kind of battle. In this strange world – which resembles a sunny, sandy island paradise – the girls are thrown for another loop as they encounter departed loved ones and ultimately have to decide if they can bear to part from them a second time. The Windows PC version of ESTIVAL VERSUS follows successful Steam® releases of previous entries in the SENRAN KAGURA series, including SENRAN KAGURA SHINOVI VERSUS and SENRAN KAGURA Bon Appétit! – Full Course.

With over twenty-five playable characters, making this the biggest roster in the series’ history, SENRAN KAGURA ESTIVAL VERSUS boasts more moves, more story, more attitude, and more destruction online with matches that can support up to 10 players (Windows PC and PS4TM system versions only; “PSVita” system supports up to 4 players). All of the series’ previous Shinobi girls return with a host of upgraded moves to master, and new playable characters offer more challenges to conquer, along with a story that’s equal parts sexy and shocking, serious and scandalous, busty and bouncy.

The faithful adaptation to PC has been handled by the original developers at Marvelous Inc. and Tamsoft, with added Steamworks support including Steam Achievements, leaderboards, cloud saves, and trading cards. XSEED Games will be publishing SENRAN KAGURA ESTIVAL VERSUS on Windows PC via Steam® this March. The title is currently available as a limited “Endless Summer” physical release for the PS4TM and “PSVita” systems, while the digital release of the game is available on the PlayStation®Store. The Windows PC version of this title is not rated by the ESRB. The PS4TM and “PSVita” system versions have been rated “M for Mature.”