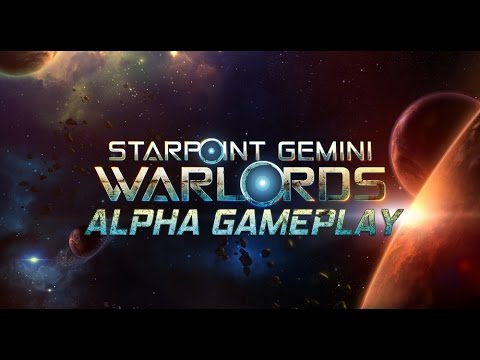 An official Steam Early Access release date has now been set for the hotly anticipated spin-off title to space simulation Starpoint Gemini 2. Development studio Little Green Men Games is currently prepping their upcoming title STARPOINT GEMINI WARLORDS (PC) for its Early Access release on Thursday, 14th April, 2016. Taking more than a small share of inspiration from suggestions put forward by the huge and loyal Starpoint Gemini community, Starpoint Gemini Warlords is a unique blend of space sim, RPG and 4X strategy genres. Conduct research and construction in your own gigantic space station, command your war fleets and heroic companions to invade enemy territory, build up your stronghold, trade, mine, salvage and remind your enemies of why they fear you.

The Steam ‘Coming Soon’ page for Warlords is already teeming with community members desperate to get their hands on the game. The game can be wish-listed on Steam.

Story
Humans, fleeing from the ruined Solar system trickled into Gemini in rag-tag convoys, their ships barely holding together. Planet Phaeneros, located in the farthest reaches of the Gemini system, abandoned long before Gemini gained its independence, will become their new home… your new home. You should prepare for what’s coming, captain. The Solari Concord needs you!

Two modes of play
The campaign mode continues the story from Starpoint Gemini 2 after the Gemini Protectorate and its allies managed to fend off the Brotherhood threat. The Empire, both in their mainspace and in Gemini have been wiped out. Only small pockets of resistance remain. Progress through the storyline at your own pace and make difficult choices along the way, changing how the storyline will ultimately play out.

The conquest mode is for the freeroamers. Strip away the campaign, but leave everything else and you have yourself the conquest mode. Create a story of your own and completely change the face of Gemini!

Community Driven
Warlords is a spin-off to our successful space sim Starpoint Gemini 2. The majority of the planned features and implemented ideas came directly from the SG2 community. All the things asked about and requested that we simply couldn’t implement in SG2, are now integrated into Warlords. And these are not minor features. We’re redoing entire sections of both gameplay and the underlying game engine.

Features:
· Headquarters. Construct and upgrade your own personal space station; a massive structure that enables you to conduct research, build ships, assemble autonomous fleets and much more.
· Conquer Territory. Gradually expand your reign over unclaimed territory, by battling minor factions, or conquer the entire Gemini sector, by facing off against familiar strong Gemini foes, familiar from the previous Starpoint Gemini titles. Reinforce conquered regions to defend themselves.
· Conduct Research on simple weapon enhancements, obtain the expertise to construct a titan class behemoth, or boost the effectiveness of your non-combat fleets. Equipment, ship systems, enhancements and ships can still be bought, but he best ‘stuff’ can only be researched, constructed and improved in your HQ.
· Construction and research demand the allocation of resources. Gather them by conducting missions for other factions, trade or purchase resources, or conquer regions providing a steady flow of resources, and bonuses.
· A far larger game world will allow more distinction between ship sizes, pockets of empty space to travel through and your own giant space HQ where ships can be ‘parked’.
· Skill classes, attributed skills and perk progression will be revamped and rebalanced, as will levelling-up, the reputation system and diplomacy.
· Storyline vs Free-roam: The campaign storyline will be blended in with the more generic conquer quests. Free-roam mode strips all main storyline missions, but leaves side quests and generic freelance missions intact.
· A full branching dialogue scheme, the industry standard in modern RPGs.
· Technical additions include: x64 system only, projection mapping, deferred shading, physically based rendering and realistic physics.