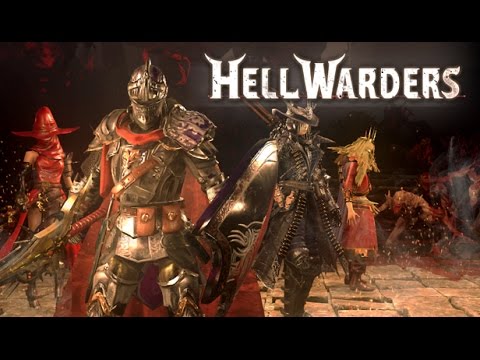 DEMONIC NON-STOP ACTION
In Hell Warders, you and your friends are tasked with defending the Nexus from unrelenting demon assaults. Play as Ash the Ember Knight, cannon-wielding specialist Dead Eye the Tainted or crafty explosives specialist Samson III the Dethroned in teams of four to scout for power-ups and create an effective (and deadly) defensive perimeter.

Fight alone or alongside soldiers with distinct abilities to withstand the might of the demon horde across a number of thematic maps – each with its unique environmental twist. Set up archers, catapults, and mages – and carefully choose where to place them for maximum defensive cover. However, defending only goes so far: The demon army waits for no man and will ruthlessly attack from all angles! Vanquish demons with powerful weapons, unmatched hero skills, and even giant gargoyles …

Defend the Nexus. Stop the demon army. Take your place as the mightiest Hell Warder of all time!

“We’re huge fans of the tower defense and hero defense genres, so we set out to create an intense co-op multiplayer game that combined elements of the two. We first experimented with various play styles and map concepts – eventually settling on the idea of heroes scavenging for towers. Building Hell Warders around this core mechanic allowed us to break from the traditional resource management gameplay and put combat at the forefront.”

*   Multiple playable classes: Choose from a roster of diverse heroes – each with unique skills and abilities.

*   Upgradeable characters: Level up to upgrade skills and perks – and defeat monsters your way.

*   Dynamic maps: Dodge flowing lava or fly on a giant spinning fan! Every map in Hell Warders is dynamic and opens up a ton of different strategies.

*   Epic enemies: From giant earth-shattering Wurms to magic wielding Liches, there’s no telling what else lies beyond the Gates of Hell …