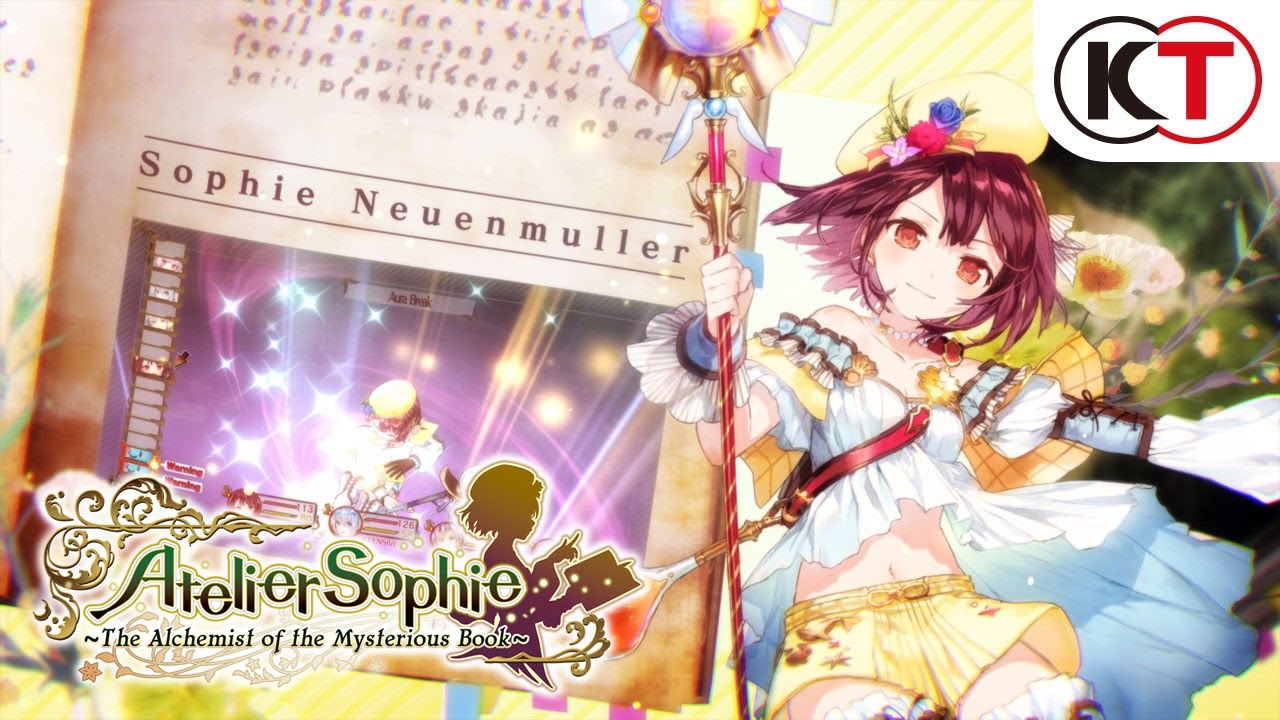 KOEI TECMO America revealed a wealth of information and assets highlighting the Synthesis system and colorful cast of characters in developer GUST’s upcoming RPG, Atelier Sophie: The Alchemist of the Mysterious Book. GUST’s long-running Atelier series comes to the PlayStation®4 computer entertainment system for the first time with this brand new, standalone entry on June 7, 2016, with a simultaneous digital-only release for the PlayStation®Vita handheld system.

In Atelier Sophie: The Alchemist of the Mysterious Book, alchemy is key to crafting useful items that can aid Sophie and her friends on their travels. Throughout their journey players are encouraged to discover and concoct a variety of new and useful recipes, which are then added to the Mysterious Book, Plachta, whose memories slowly return as her pages are filled. Using what they’ve learned, players can easily craft items with specific bonuses attached to them using the series’ brand new Synthesis system. To do this, players have access to a 4×4 panel system which can grow depending on the type and quality of the cauldron. As ingredients are placed into the cauldron, they will take up a set amount of tiles on the panel which, if utilized correctly, allows items to be more efficient than they normally are. A wide choice of recipes with different shape, size and quality can be used to craft items, and making full use of the panel space is vital to receiving optimal bonuses.

On their journey, players will play as Sophie Neuenmuller, who runs an atelier in the town of Kirchen Bell. Joined by best friends Monika Ellmenreich and Oskar Behlmer, they begin a quest to learn new alchemy recipes and restore Plachta’s missing memories. Along the way, they also meet Julio Sebald Leidenschaft, a young knight from the country of Adalett, who’s investigating alchemy for unknown reasons, and Fritz Weissberg, an ex-mercenary – now puppeteer – who is skilled with the ways of the sword.

A diverse cast of townspeople are also on hand to help Sophie and her friends with their adventuring needs. Making his return from Atelier Escha & Logy: Alchemists of the Dusk Sky is Logy, who runs a prosperous blacksmithing shop in town. Corneria, a girl with the unique ability to duplicate items, runs a mass production shop. Harol Simens is the local clock shop owner, and while he can be sarcastic and harsh, he’s in fact a caring and helpful fellow. Leon is a travelling clothier, proud of her talents at making charming clothes. Horst Basler runs the café and will serve as Sophie’s eyes and ears, as he is well-versed in the latest information around town. Sophie will meet many other members of the game’s residents in encounters that include events and cutscenes.

A limited edition of Atelier Sophie: The Alchemist of the Mysterious Book is currently available to pre-order exclusively through NIS America’s Online Store, which includes a 48-page hardcover art book, a 2-disc soundtrack with 38 tracks of in-game music, a cloth poster, and five miniature art prints all housed in a beautifully designed collector’s box.
This title has been rated “T for Teen” by the ESRB.

About Atelier Sophie: The Alchemist of the Mysterious Book
Set against a vibrant background reminiscent of a medieval European town, Atelier Sophie: The Alchemist of the Mysterious Book follows the exploits of a young novice Alchemist, Sophie, who discovers she is the owner of an enigmatic volume imbued with a soul. This Mysterious Book seems to hold all the secrets to the art of Alchemy, even going on to become Sophie’s mentor. As Sophie improves her Alchemy skills throughout the story she unravels the book’s forgotten memories, and eventually sets out to uncover the strange tale of her teacher’s origin.