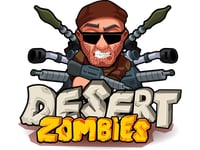 Tarboosh Games, a Middle Eastern based game studio released Desert Zombies, a post-apocalyptic epic survival journey in which a team of heroes fight hordes of zombies to defend their base. The game is free-to-play with in-app purchases and is available for both Apple and Google Play stores for mobiles and tablets.

“The mission of Tarboosh Games is to build quality games that are captivating while remaining true to the targeted platform and its audience” said Rani H., Founder and Creative Director at Tarboosh Games. He added: “Desert Zombies delivers on this promise with an original touch-based control while maintaining a level of sophistication and strategy that players will appreciate.” Desert Zombies had a soft launch in November 2015, which was met with a positive critical reaction leading to the game being featured in a number of regional App Stores as Best New Game for the iOS platform.

Desert Zombies is an action arcade game where you fight large groups of zombies using dozens of weapons, fortifying and upgrading your bases along the way, while arming your teams to stand your ground from the endless waves of zombies across tens of levels and missions. Desert Zombies is a game of wit and intelligence with strategizing and prioritizing that will test the limits of your endurance!