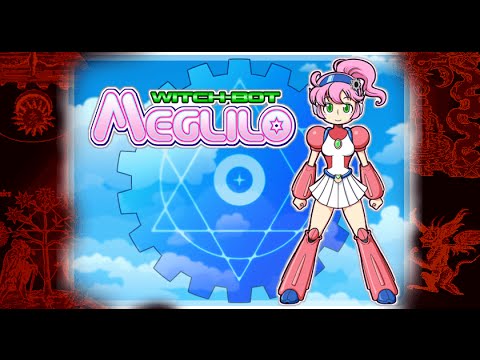 Playism and Astro Port would like to announce that “Witch-Bot Meglilo” has now been released on Steam.

Witch-Bot Meglilo is a vertical shmup with dark comedy and unique battle features.

Meglilo came from the magic kingdom to visit the human world, but she was unfortunately killed when she landed in the midst of a confrontation between Professor Amamori, inventor of the Vulkaiser, and the Gogoh Army.

Professor Amamori performed a reconstruction operation on her, and she was brought back as a WITCH-BOT, to seek revenge on the Gogoh Army!

Join Meglilo and her adorable sidekick/conscience, Billiken, as they blast through multiple worlds and bosses to bring about order and justice…after tragedy has already occurred.

Mixing classic vertical shmup action with hilariously dark cut scenes, Meglilo isn’t a game where you just skip straight to the action. Watch as our heroine waits until AFTER the villains do terrible things (usually watching the whole time) before leaping into action. With great campy dialogue and questionable morals, WITCH-BOT Meglilo’s cute aesthetics belie the sheer amount of havoc that happens around you.

Features:
· Various chapters with dark comedy stories accompanying the different stages.
· A time-stop mechanism to allow you to pause time and teleport to a different location.
· 10 variations of satellites to assist you, each one is interchangeable.