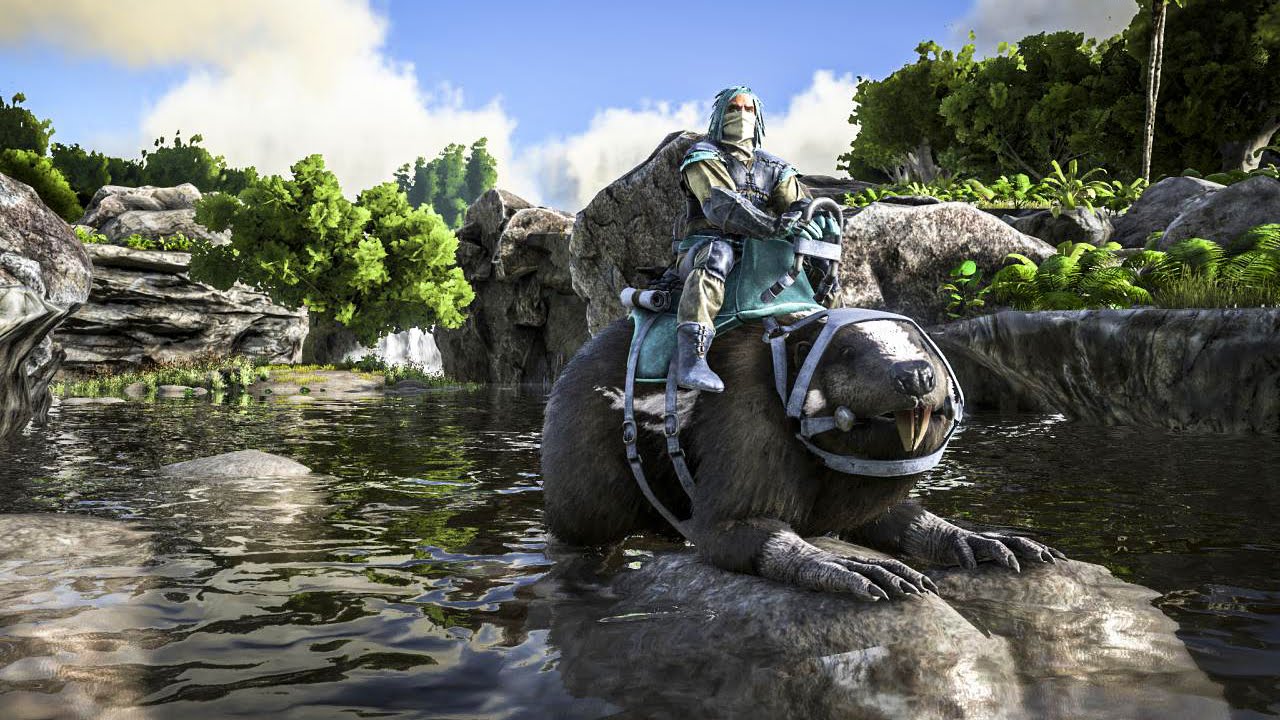 In its quest to provide Xbox One players with the newest, most imaginative changes in ARK: Survival Evolved, Studio Wildcard unveiled today several new dinosaurs, gadgets, weapons, and upgrades that bring the Xbox One version to near parity with the PC iteration of the game. Survivors can now tame, train, and mount Giant Beavers, saddle up on the flappy Terror Bird, and equip themselves with the multi-use Grappling Hooks, while taking prisoners into custody using the newly implemented Handcuffs.

Hello! Hallo! Cześć! Lēe hò! Coming this week, players in 11 new countries will be able to purchase and download ARK: Survival Evolved as the game will become available in their regions. Belgium, Denmark, Finland, Hong Kong, Netherlands, Norway, Poland, Singapore, Sweden, Taiwan and Turkey are the latest areas to join the island as Studio Wildcard continues to expand the game into all areas of the world.

The Terror Bird makes a good combat mount for harassing and scouting.

Don’t like that person who keeps stealing your Terror Bird? Cuff ‘em!
ARK Survivors will find the Giant Beaver, aka Castoroides Feliconcisor, to be super-cuddly, but also super useful since it can build dams, harvest and carry vast quantities of wood, and act as a mobile crafting station. Plus, they can swim! The Terror Bird, or Phorusrhacidae Rapidesultor, is a tamable, aggressive avian capable of high-speed sprints and brief leaps, but it doesn’t technically fly, as its flight is comprised of short, sustained “Joust”-like glides or leaps.

Amongst the human population, Studio Wildcard has introduced two new game-changing tools, the Grappling Hook and Handcuffs. The Grappling Hook gives Survivors the ability to scale cliffs, hitch a ride by attaching to a flying creature, or even wrangle other players, prisoners, or small creatures to drag along. Learning how to regularly use this tool will alter the nature of player attacks and dramatically expand the range of their travels with greater ease. The new Handcuffs ensure that prisoners don’t escape and aren’t violent. Wildcard Studio encourages Survivors to get onto their ARK now to ensure they’re the ones doing the Handcuffing, and not the other way around!

ARK: Survival Evolved will launch in summer 2016 on Xbox One via the ID@Xbox program, PlayStation®4 with Project Morpheus support, and full release on Steam PC. The game is currently playable in Microsoft’s Game Preview on Xbox One and Steam’s Early Access program, which includes Oculus Rift VR support and an integration of Steam community features such as Steam Economy and Steam Workshop for custom maps and mods. Players can host private/LAN servers and have access to a custom-built version of the Unreal Engine 4 Editor for creating mods. The world of ARK is designed to be modder-friendly and ever-expanding!