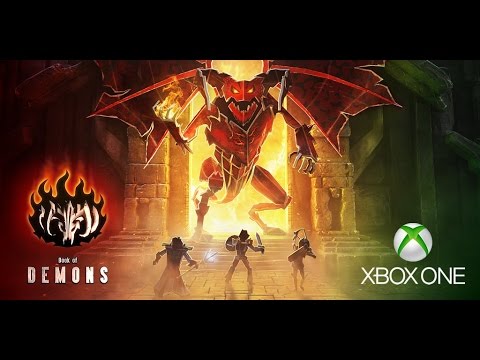 Thing Trunk announced that Book of Demons, the upcoming PC action-RPG will be a console exclusive for Xbox One. Book of Demons is a deck-building hack and slash adventure game, where it’s the player who decides the length of quests. The game is the first installment of Return 2 Games – a series of original mid-core titles, inspired by the early golden days of PC gaming.

Check out the Xbox One Announcement Trailer:

What makes Book of Demons stand out is the number of twists in the basic gameplay mechanics, paper cut-out graphics, a dark theme intertwined with a fair dose of humor, and most importantly – the unprecedented accessibility.

The hallmark of Book of Demons is the character development mechanic – the game supersedes the usual hack and slash statfest with a single solution, a card system. Players will collect, upgrade and combine skill cards to compose their own decks of powers. Sounds pretty simple, however there is no ultimate card set that fits all the situations – to survive, gamers will have to constantly come up with new strategies and implement regular adjustments to their skill collections.

The second feature which greatly increases Book of Demons’ ease of play is the possibility to select the length of each quest, so players can choose if they would like to embark on a longer, more epic journey or take on a 5-minute mission. Shorter missions do not mean they are easier, though – thanks to the Flexiscope™ system, players will always experience the same intensity of gameplay, no matter the length of current quest.

Book of Demons puts players in charge of one of 3 characters taking part in an epic, but humorous, quest to save Paperverse from total destruction. While the game facilitates the player in every possible way, the quest itself surely is not a piece of cake. To defend the world from ultimate devilry, players will have to explore procedurally generated dungeons, confront over 70 monster species and fight a brigade of evil bosses, including the nasty Archdemon. If someone wants to hang out in the catacombs a bit longer, well, of course he can – there’s a Freeplay mode where players can master their favorite quests and rise to the challenge by completing the game on higher difficulty levels.

Book of Demons will be available on Xbox One thanks to ID@Xbox, Microsoft’s program which enables qualified game developers of all sizes to unleash their creativity by self-publishing digital games on Xbox One, giving studios the tools and support needed to maximize their success.

The PC version of the game will be available on Steam this year and is currently available for pre-order at a discounted price of $14.95. For more information about the game and pre-orders please visit http://bookofdemons.com