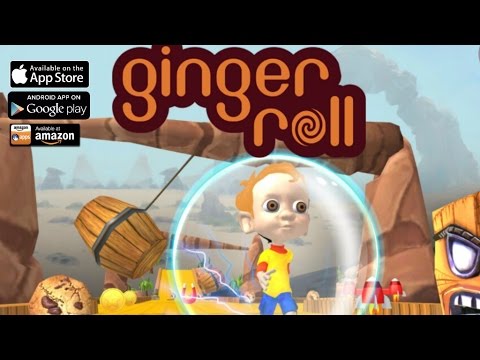 All jokes aside, ginger-haired people often seem to get a hard time but they won’t with our new mobile game called Ginger Roll.

Saif has been trapped in a zorb ball by the evil and ruthless child-genius Iblis. He has also transported him to an alternative dimension that involves challenges, obstacles and enemies. It is upto Saif and his little friends to stop Iblis from world domination and save the world. Can you help them?

In Ginger Roll you control the small cute ginger-haired boy Saif who is on a journey to save the world from the sinister Iblis. You must help him defeat Iblis and his minions all while collecting cookies, powerups and looking adorably cute.

You will have access to many different powerups like the basketball powerup which transforms your zorb ball into a jumping ball! You can also customize Saif and his friends with some fetching costumes like the Karate outfit or Astronaut outfit.

Ginger Roll has been developed and designed by IRF Media, a game development studio based in the UK. “We are very excited that Ginger Roll has made its way to the Apple App Store. Ginger Roll has fun and immersive gameplay and a great story. We think iPhone and iPad users will love Ginger Roll,” said Adnan Ramzan, founder of IRF Media.

Ginger Roll has over 55 spectacular levels spread over 4 beautiful and diverse worlds like Jungle. The levels are challenging and will have you entertained for hours on end.