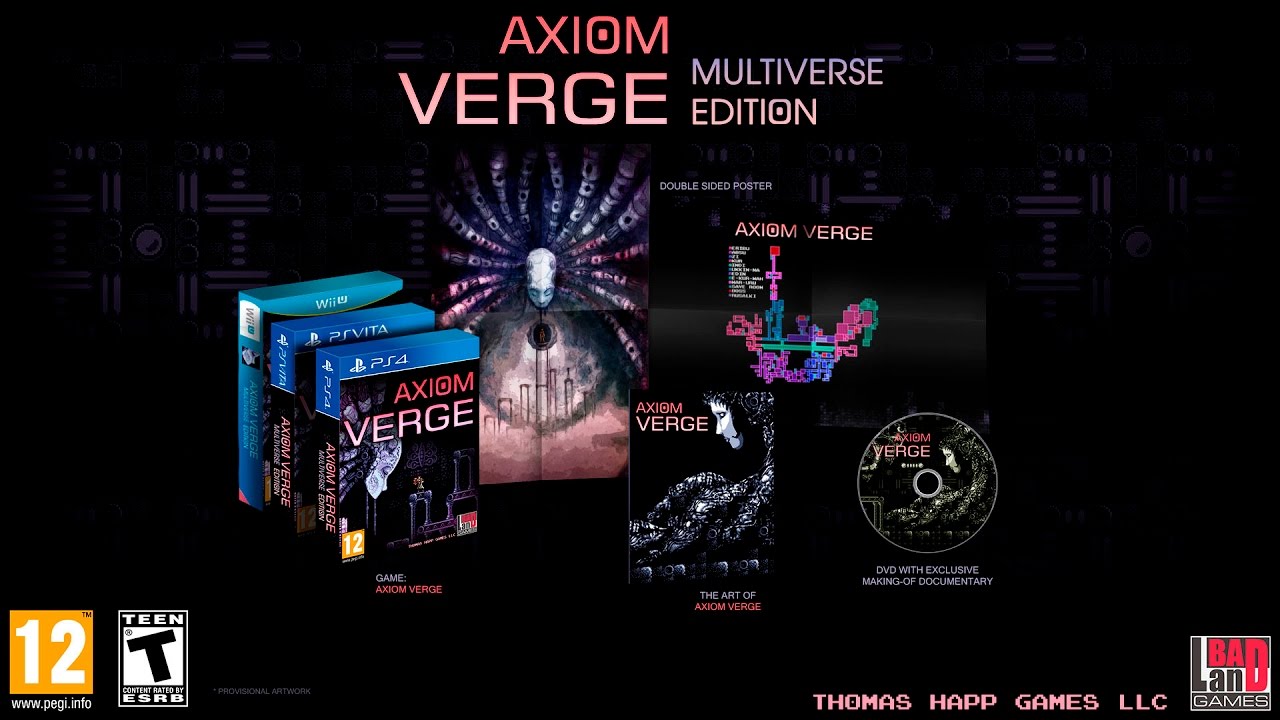 BadLand Games and Thomas Happ Games are proud to announce that the award-winning, Metroidvania-inspired Axiom Verge will be making its way to physical retail as the Multiverse Edition for PlayStation 4, PlayStation Vita, and Wii U. Get ready to question your reality once more in this collectible special edition tailor-made for Axiom Verge fans.

Thomas Happ spent five years creating Axiom Verge entirely by himself – including the programming, art, story, and music. From its initial release, Axiom Verge turned quite a few heads when it launched in 2015. Since then, the game has also launched on several additional platforms, been awarded a plethora of stunning review scores, and received dozens of awards from major publications – including PlayStation Blog’s “Editors Choice 2015,” Hardcore Gamer’s “Best of 2015,” Giant Bomb’s “Top Games of 2015,” and more.

Jeff Gerstmann, Giant Bomb (5/5):
“You think you know how Axiom Verge will play out. You don’t.”

Peter Brown, GameSpot (8/10):
“Axiom Verge is better than the games that inspired it.”

Jeremy Parish, US Gamer (5/5)
“Simply one of the best games I’ve played in years.”

“Axiom Verge is one of the most iconic Metroidvanias out there, and we are thrilled to be able to bring the Multiverse Edition to retail,” says Luis Quintáns, CEO of BadLand Games. “Platformer fans can now experience Axiom Verge to the fullest – thanks to a few neat extras and a special ‘behind the scenes’ look at all the work that went into the game.”

“Fans have been asking for a physical retail version of Axiom Verge since the game originally launched,” says developer Thomas Happ. “I’m extremely excited that the Multiverse Edition will be coming to retail soon. As a solo developer, it’s always been a dream of mine to see a game that I made end up on the store shelves!”

The Multiverse Edition of Axiom Verge will include: a copy of the game, a deluxe booklet with developer commentary and art, a double-sided poster, and an exclusive making-of documentary on DVD. This special edition will be available on PlayStation 4, PlayStation Vita, and Wii U. Other formats are yet to be confirmed.

The World of Axiom Verge:

After a lab accident, Trace awakens on the mysterious alien world of Sudra. Unsure if he was beamed to a distant planet or the far future – or if he’s trapped in an elaborate computer simulation – Trace begins his quest to defeat Athetos and uncover the secrets of Sudra.

•Expansive non-linear exploration of multiple labyrinthine, interlocking areas.
•Tons of unique tools and abilities, loads of weapons, and bundles of health/power/attribute upgrades.
•Combat dozens of unique creatures and bosses.
•In-game glitches allowing you to break past the boundaries of normal gameplay.
•Speedrun mode: Play with a streamlined interface and additional features.