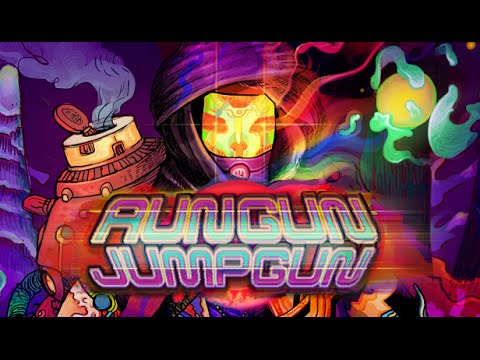 Gambitious Digital Entertainment and independent developer ThirtyThree have released the side-scrolling retro runner-platformer RunGunJumpGun. A neon fever dream of action inspired by the precision and speed of Downwell, movement of Flappy Bird and attitude of Hotline Miami, this ruthlessly challenging experience thrusts players into the jaws of death at breakneck velocity.

Armed with a massive, gravity-defying gun, players can only hope to survive RunGunJumpGun by mastering the game’s simple, two-button controls: one to explode upward in flight, the other to blast forward through obstacles. There are over 120 levels of meticulously merciless mayhem, with heart-pounding dangers and elusive pickups that demand fast thinking and reflexes to conquer. A bonus marathon mode lets players prove themselves in the ultimate test of skill against the world on the global leaderboards.

Set in a warped space-opera universe with bizarre, larger-than-life characters, RunGunJumpGun features blazing visuals, hyperkinetic sound design and a pulsing soundtrack, as well as key art from El Huervo, the creator of the distinctive cover art for Hotline Miami.

RunGunJumpGun is now available on Windows PC and Mac for $7.99 via Steam, The Humble Store, Green Man Gaming and the Mac App Store. A special edition of the game featuring its thumping digital soundtrack, a desktop wallpaper and high-resolution key art is also available for $9.99.