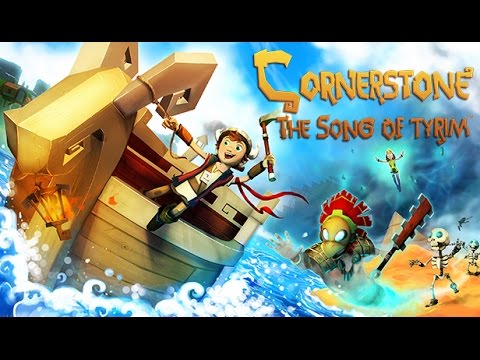 Phoenix Online Publishing and Overflow Games are excited to announce today’s release of epic action RPG Cornerstone: The Song of Tyrim for PC, Mac, and Linux! Starting as a successful Kickstarter campaign in 2013, this sweeping fantasy tale in which combat, crafting, and physics-based puzzle-solving collide has already been praised as “an excellent action-adventure game” and “a breath of fresh air in the industry.” As young Viking Tyrim, players will take on a range of wondrous quests, battle unforgettable adversaries, and experience the adventure of a lifetime in Nygard, a legendary world of wonder bursting with colorful characters, playable vehicles, and open-world adventures. Featuring a complete crafting system that lets you build your own weapons and gear, playable vehicles ranging from ships to windsurfers, and dozens of quirky characters to interact with as you explore eight exotic islands filled with tricks, traps, and treasures, Cornerstone is now available on the Phoenix Online Store, Steam, GOG.com, the Humble Store, and other major online retailers for $19.99.

The Viking men of the village of Borja haven’t been seen in weeks, and Tyrim is determined to set forth and find them: An objective that will send him sneaking deep into the heart of enemy fortresses, combing dank dungeons on a hunt for lost artifacts, and actively taking the fight to the forces of evil as he pursues an increasingly inventive range of quests. Wielding the young warrior’s crafting and combat skills, you’ll set sail on trusty galleon the Mad Goat across the seas to uncover the world of Nygard’s mysteries, collecting fabulous relics, uncovering forbidden secrets and magic, and ultimately challenging a powerful ancient evil as you quest to bring the Vikings home.

“Developing this game has been such an amazing journey. Lots and lots of hard work, long days, late nights, many laughs and even a bit of frustration. We have probably developed as much as Tyrim has since the very start of this project!” says Jonathan Prytz, Lead Game Designer and Artist. “We have to thank our Kickstarter backers for believing in this game two and a half years ago and we hope to make them proud with all that we accomplished today! Finally the release is here and we’re super excited!”