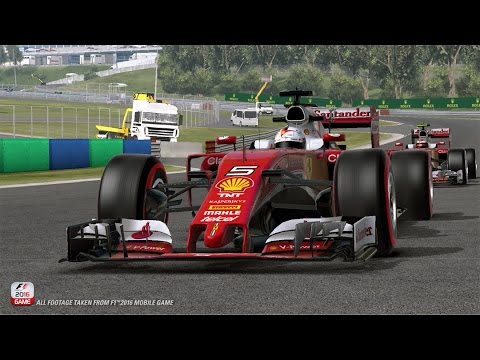 F1 2016, the only official mobile game of the 2016 FIA FORMULA ONE WORLD CHAMPIONSHIP™, is now available on the Google Play Store, allowing Android users the chance to recreate the whole season, including the tense finale at the 2016 FORMULA 1 ETIHAD AIRWAYS ABU DHABI GRAND PRIX. Following the recent chart-topping release for iPhone, iPad and AppleTV, F1 2016 is now available on the Android platform, and features all of the official content, stunning visuals, multiple game modes and pick up and play controls, perfect for gaming on the move or at home.

All 21 of the official FORMULA ONETM circuits from the 2016 season, including the thrilling new BAKU CITY CIRCUIT and icons of the sport such as CIRCUIT DE SPA-FRANCORCHAMPS, CIRCUIT DE MONACO and SILVERSTONE CIRCUIT, are faithfully recreated in unprecedented detail on a mobile device, and are all available in quick race, full season, custom season or time trial.

Race as one of the world’s best drivers including MERCEDES AMG PETRONAS Formula One Team’s Lewis Hamilton, Scuderia Ferrari’s Sebastian Vettel, Red Bull Racing’s Max Verstappen, McLaren-Honda’s Fernando Alonso, Sahara Force India F1 Team’s Sergio Perez and many more, with 22 of the world’s greatest drivers and all of the 11 teams from the 2016 season represented.

Ian Flatt, Executive Producer of the FORMULA ONE videogames at Codemasters, commented: “Following the great success of F1 2016 on the iOS and tvOS platforms, both in terms of user feedback and chart position, we are delighted to be bringing the same fantastic experience to Android users. This version of F1 2016 has been developed specifically for mobile devices but continues to deliver a console quality experience in terms of gameplay and graphics. Every car model and every circuit has been optimised from the full console game to ensure the highest quality experience, and we have pushed the technology to the absolute limits. Whether you want a quick race on your favourite circuit or an entire season of races containing practice sessions, qualifying and full length race sessions, it has been designed for playing on the go with flexible game modes that allow you to get straight into the action. The F1 2016 mobile game is great to play whether you are commuting, waiting for friends or sat at home on the sofa.

“There are four different control schemes as well as a full suite of driver assists and in game options that let you create the experience that suits you,” continued Ian. “Whether you are new to racing games or have been playing them for years, you can find your ideal gameplay experience in F1 2016.”