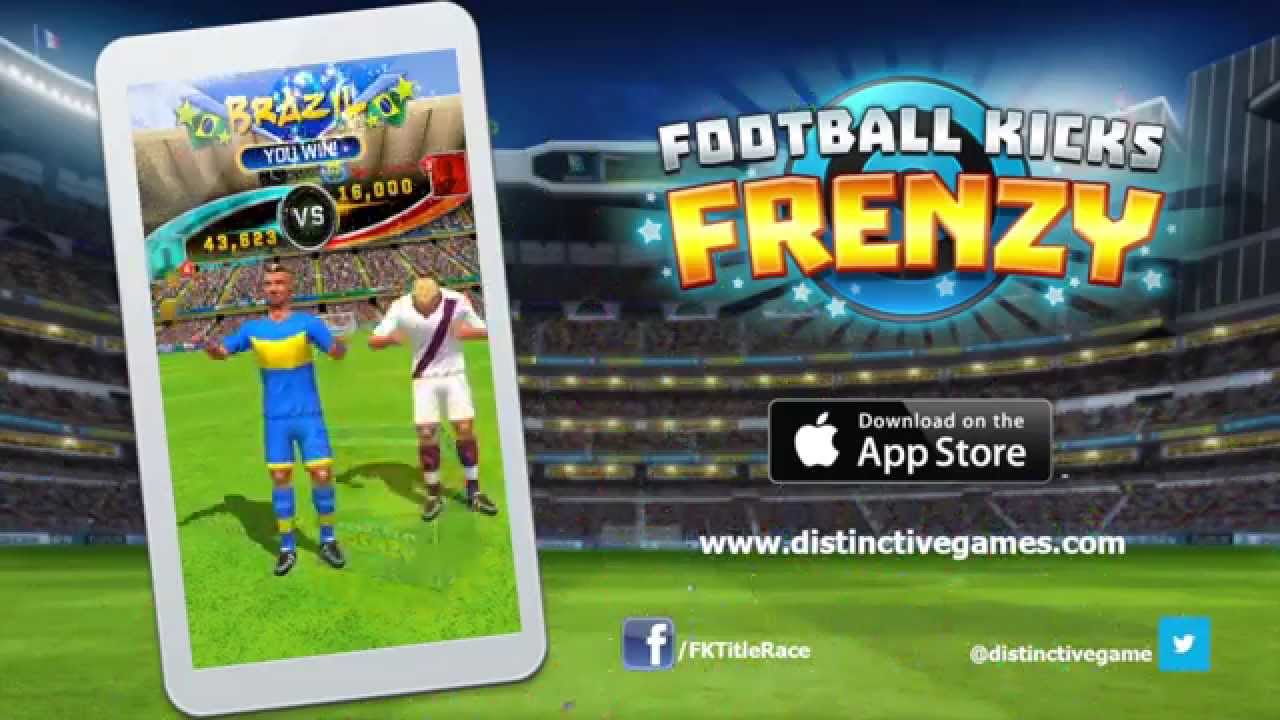 Score goals and inflict punishing obstacles upon your opponent in the most frenzied head-to-head football battle on mobile! Look no further than Football Kicks Frenzy, a brand new online football free-kick game for iOS, out now on the App Store! You’ll need to outplay your opponents at every kick to win big! Go up against your friends in real-time competitions, keep your cool and throw obstacles their way by hitting a scoring streak.

Brought to you by Distinctive Games, the developers behind leading mobile sports titles such as Downhill Xtreme, Patrick Kane’s Hockey Classic and Rugby Nations 15, Football Kicks Frenzy is an intense, competitive test of your football goal scoring skills. Continuing the Football Kicks series for a third time, this latest game adds a head-to-head challenge against your friends.

From the humble beginnings of Football kicks through to the fun and mayhem of Football Kicks Frenzy, the series has had a notable evolution. Work your way across the world’s stadiums as you battle your way to the top of this arcade-style free-kick mobile game.

· Play against real opponents by challenging your friends on Facebook and Apple Game Center!
· Split screen action keeps the tension high as you try to outmanoeuvre your opponents!
· Customise your player with hundreds of design and colour combinations to show off your personality!
· Send obstacles such as brick walls or hurricanes to your opponent’s goal by getting score streaks!
· Play mini-games such as spin the wheel and scratch cards to win more coins and prizes!
· 26 million existing Football Kicks players can’t be wrong!
Football Kicks Frenzy features motion-captured animations using the latest version of Distinctive Games’ bespoke PHOENIX™ game engine, showing off top-notch 3D rendered visuals, physics and sound.

“After releasing several simulation-style games, we wanted to bring something a bit more competitive for football fans.” says Nigel Little, Managing Director. “Football Kicks Frenzy is a fun, arcade style entry into the Football Kicks series, and I’m sure it will find a place next to other classic mobile games on your smart device!”

A free download, Football Kicks Frenzy gives you everything you need to score your way to victory. Earn coins and gems to unlock new kits, balls and characters. Live in the UK or Ireland and want to play in the official England Team kit? Visit the in-game store to deck yourself out in the latest team look.

Football Kicks Frenzy is out now on iOS for free. If you wish to review the game, please don’t hesitate to contact us.