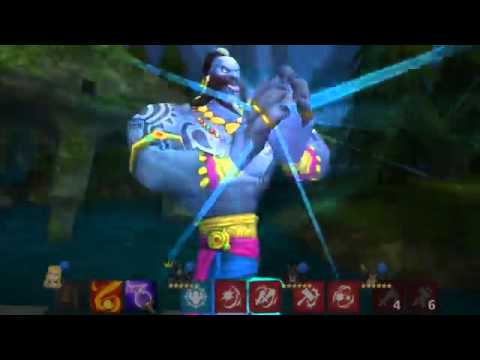 TOAST, the publishing brand of NHN Entertainment USA, has released the March update for Guardian Stone! Three new Guardians arrive with powerful new abilities! Grace, Master Gordon, and Christine can be summoned with skills to help you rise through the ranks of the new PVP system and revamped Challenge Mode!

Challenge the Titans in an epic Weekly Battle against every other player in the world! Compete for individual awards and achievements and climb the Ranks for a weekly reward of Rubies. Fight the 7 different Titans each day with your best score recorded and compared to the global competition! At the end of the week, all players will be rewarded Rubies based on their final rank.

New PVP system has been revamped to give players more options and more opponents! Each League is separated into groups of 15 players. Receive gold and PVP points with every win or victorious defense. Fight one of these 15 opponents and climb the ranks within your group. The Top 5 in a group will be promoted to the next league, the bottom 5 will be demoted, and the middle 5 will stay in the current league for another 24 hour period of brawling in the tavern! Receive a massive Ruby reward at the end of the week based on your final overall ranking.

The Upgrade System has been revamped to make it easier to give a much needed boost to your Guardians. Now you can use any extra exact same Guardian, at any time, to upgrade your main Guardian! No more storing Guardians in your inventory for weeks at a time until you have enough. Upgrade 6-star to their max upgrade limit of +15 for a 20% permanent bonus to your Guardian stats.

■ Key Features
•Collect over 75 Guardians in an epic mobile battle against evil dragons, rampaging demons, and vicious orc hordes.
•Simple turn-based tap controls allows you to tactically take command of every battlefield. Unlock new powers by summoning new Guardians!
•Pick your favorite Guardians and help them evolve to their ultimate forms. Take any Guardian from a puny 1* Tier to the perfect 6* Tier with several opportunities to customize and improve their abilities along the way!
•Choose your Hero – The precise Ranger, the arcane Sorceress, or the barbarian Warrior.