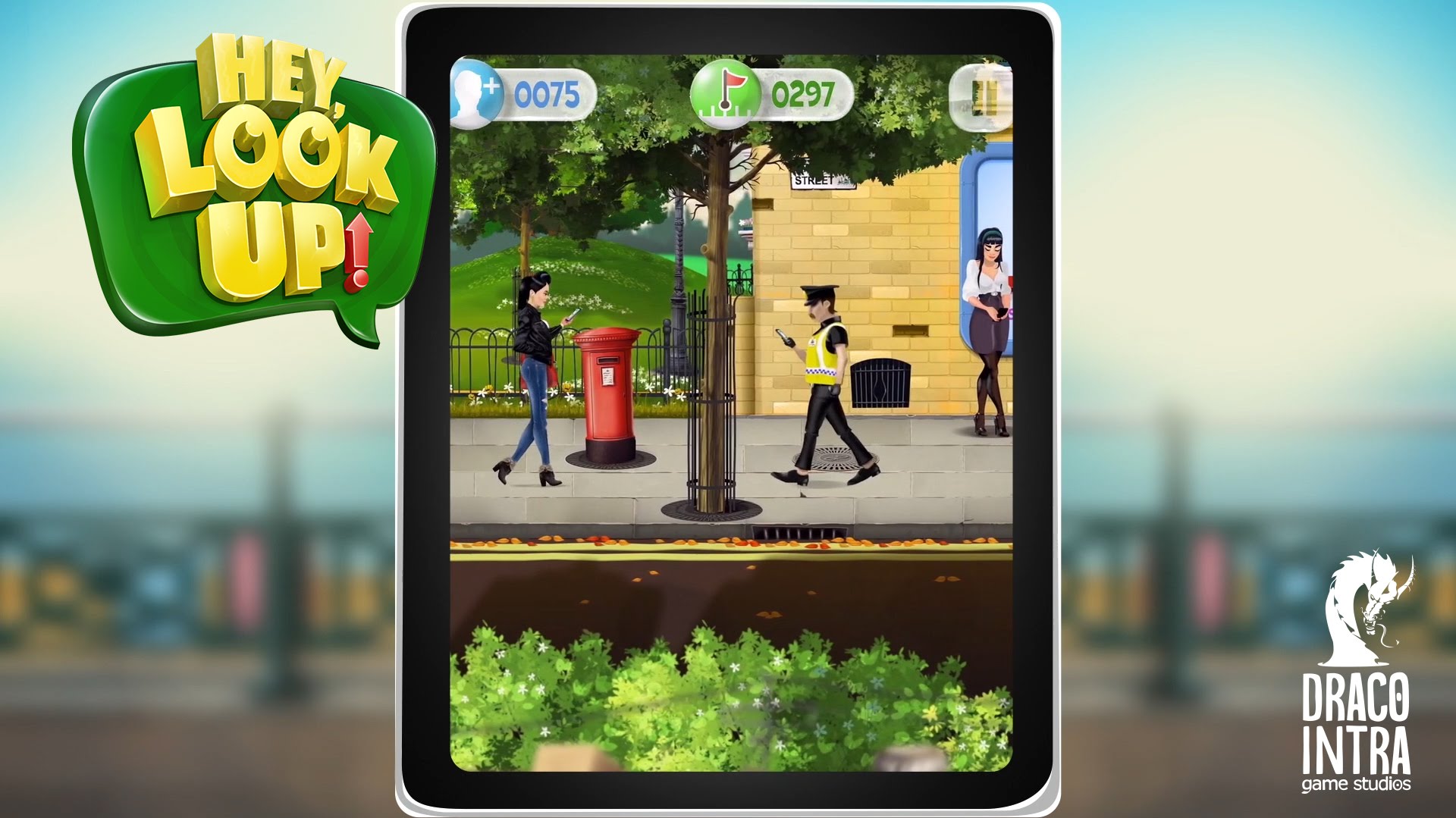 Draco Intra, a minuscule game studio, has launched its first and unique endless text-walking game on Indiegogo. Designed and well-crafted for touch devices, Hey, Look up! is a casual mission-based game about text-walkers and their journey to become virtually famous.

„They don’t eat human flesh, nor infect you with a single bite, but that doesn’t make them less dangerous. Joke aside – we are them. Me too. Hey, Look up! is a game where you get to control them. Now, that is fun.” – said Gabor Szucs, designer of Hey, Look up! and co-founder of Draco Intra, the tiny studio behind the game. The players’ goal is to complete missions while collecting followers. To achieve that, players have to avoid collision with other text-walkers and street obstacles. The more missions they complete, the more new locations they unlock.

„We didn’t want to make a game where you would collect coins, stars, gems or even bananas lying around on the streets. We wanted something more original than that. The subject of the game gave us the answer.” – said Szucs. In order to unlock characters and climb the leaderboard, players have to collect followers. And they have to work hard to earn them. There are three main ways to build their networks: taking as many selfies as they can, sending tweets until their finger bleeds and shooting videos like there is no tomorrow. And that’s how they become virtually famous!

„With Hey, Look up! we want to raise mass-awareness to the text-walking phenomenon and how to achieve this if not by putting text-walkers into a game where they can face the real dangers of it? Our hope is that they would be more aware of the risks when using their phone on the street. Who knows, maybe even by giving each other a friendly notice quoting the game’s slogan: – Hey, Look up!” – said Szucs.

Everybody backing the project on Indiegogo will be pinpointed to the Backers World Atlas, a map available from the game’s main menu and searchable by name, location and type of support. Backers receive a fully unlocked version of the game, exclusive in-game phone designs, a bonus character, an exclusive Power-Up, a wallpaper set and digital artbook with only a $5 or more and become beta testers with only a $10 or more pledge. Starting from a $25 pledge, Backers’ names appear in the game in a „Hollywood Star”. From $150 they appear in the game as a text-walker, from $500 riding on a bicycle, a scooter or a skateboard. For $3000 one lucky Backer becomes the geek main character of Hey, Look up!. However, the luckiest one is certainly the $5000-Backer getting the superreward of a 100% Backer-designed main character.

The developers plan to launch the game in April for iPhone, iPad and iPod touch as well as for Android and Amazon phones and tablets.

Find out more by watching the Hey, Look up! Indiegogo page:
http://igg.me/at/heylookup