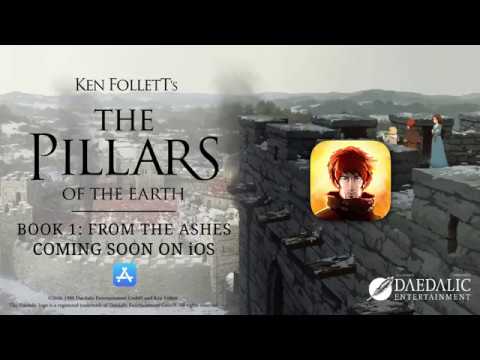 Daedalic Entertainment’s mobile adaptation of the “The Pillars of the Earth” series of books is available for iOS on the App Store. The award-winning adventure game celebrated its debut in 2017 on PC, Xbox One and Playstation 4. Book 1 is now available for iOS devices.

The highly praised 2D animations in the style of an old storybook thrilled players in the PC and console versions, and now players can enjoy them on their mobile devices. Players can immerse themselves even deeper in the adventure, which has been fully optimized for smaller screens by adapting only the controls and icons.

In the troubled times of the 12th century, players in The Pillars of the Earth explore  medieval England with the protagonists Jack, Aliena and Brother Philipp, who struggle to build the revolutionary Gothic cathedral of Kingsbridge. As a result, Kingsbridge gains economic, social and political influence in the region, but this brings out sinister adversaries who oppose the characters. The new cathedral is a thorn in the side of Bishop Waleran and William Hamleigh, a noble who was rejected by Aliena and is out for revenge, and they will stop at nothing to destroy it. Players accompany the protagonists on their intertwined paths over several decades and influence their fate with their decisions.

Over 26 million copies of Ken Follett’s famous novel have been sold worldwide.

The Pillars of the Earth – Book 1: From the Ashes includes:

The Pillars of the Earth – Book 1: From the Ashes is now available on the App Store. The minimum requirement is iPhone 6s or iPad Air 2 or newer.