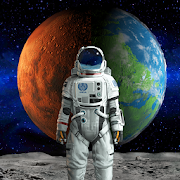 The stars have aligned! Terragenesis has now colonoized Android devices. Thanks to developer Edgeworks Entertainment and publisher Tilting Point, Google Play users can now participate in the immersive terraforming experience that over 1 million iOS players have enjoyed. Following the Android launch, TerraGenesis is rolling out its 5.0 update in May, which is titled Historical Earths. Now, not only will players be able to explore space, but time as well! Featuring a bundle of new planets, players can engage with Natives – indigenous populations ranging from cavemen to dinosaurs. Additionally, the new Worldkillers feature introduces rare disasters such as meteoroids that may potentially befall your planet.

With a slew of in-depth management systems and physics based on real life data from NASA, fans of both space and strategy games will love TerraGenesis. Founder and CEO of Edgeworks Entertainment, Alexander Winn, launched TerraGenesis as its sole developer. By utilizing a vast background in mobile app development, passion for space, and a little bit of luck, Winn was met with an overnight success.

Key features of TerraGenesis include: