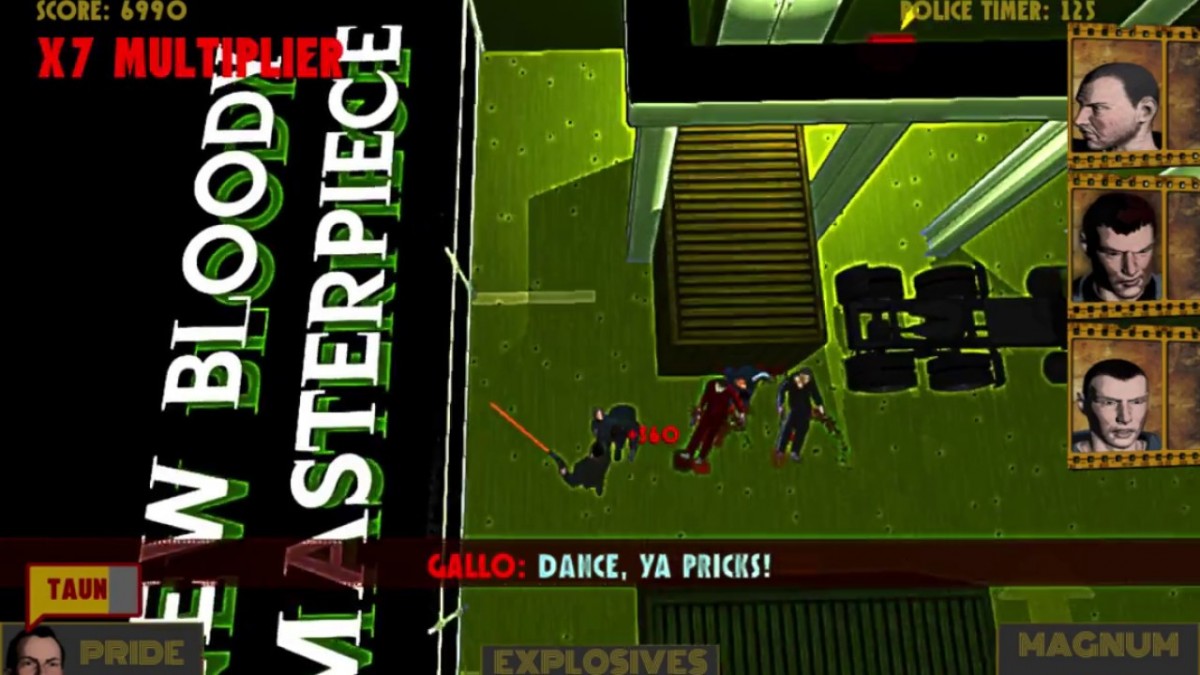 Man of Honor is an experiment in character-centric design: the character of its protagonist, Emilio Gallo, inspires the game mechanics from the smallest detail to the complex architecture of the game, its levels, and mode of play. Taunting enemies—Gallo’s preferred means of interacting with others—is essential to beating a level. It slows down attackers and antagonists. Gallo engages in careful planning before he attacks his enemies, which allows you to scan a level and chart your initial course. Once in the thick of the fray, though, he is fast and reckless. Killing enemies quickly raises your score multiplier, and makes your bullets bigger and more powerful. An old-school Italian mobster, Gallo lives for his pride. His health-meter is actually a pride-meter. There are lots of ways for a player to raise Gallo’s pride. Drinking his favorite Rusty Bay beer is one way to increase his pride, but it has a downside: It makes the screen go blurry, because Gallo is easily intoxicated—by excitement, by beer, and by his own grandiose ambitions.

The esthetics of the game also reflect Gallo’s character. The headlines that surround the field of play exist in his imagination, and they showcase his craving for fifteen minutes of fame. He wants to be the greatest hit man ever. His ambitions and desires become wilder the further he gets in his quest. But they’re counterbalanced by eerie undertones that waver and flicker on the ground under his feet. When his ambitions get more and more over-the-top, the undertones start to come fast and furious. Under his flamboyant, all-powerful façade, he’s a neurotic mess, full of anxiety and self-doubts because of his traumatic childhood. Underneath it all, he’s still the sad, lonely kid whose Dad beat him up when he came home after hauling crates off barges. But you’ll never get Gallo to admit that. He’ll just tell you he’s the next Michael Corleone or Tony Montana.