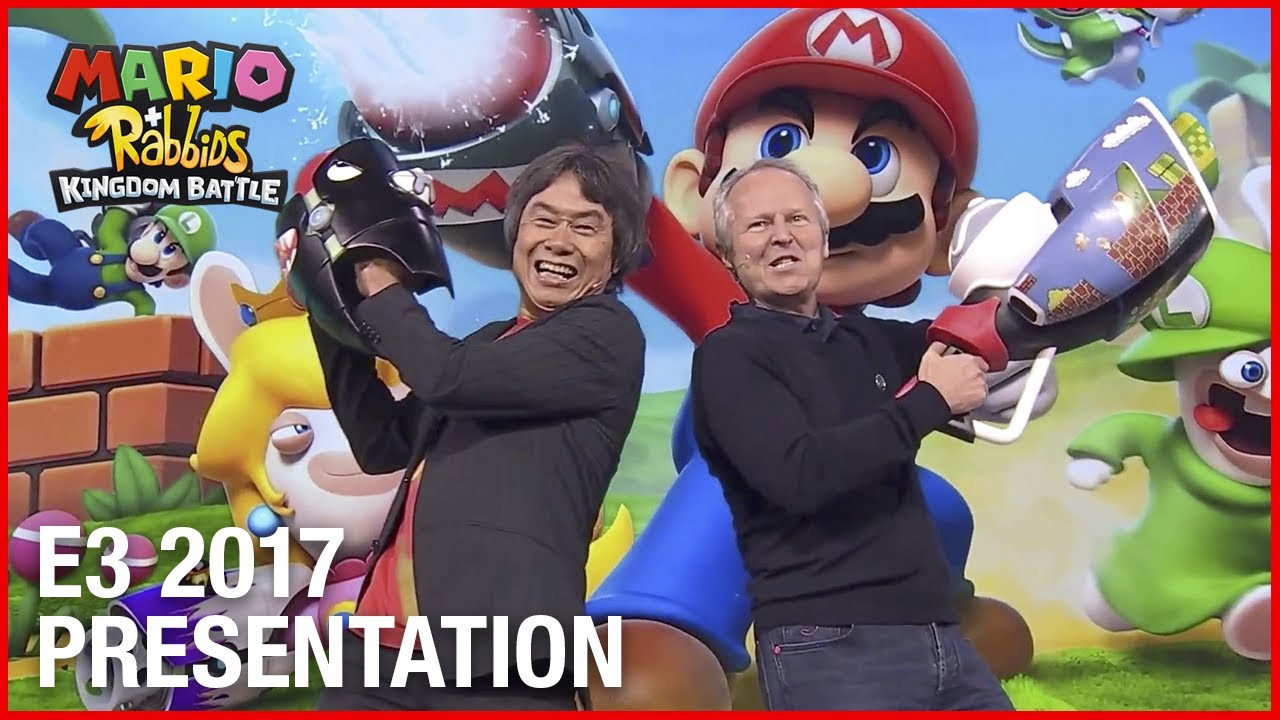 Ubisoft® and Nintendo announced a partnership to bring a brand new adventure to life featuring Mario, Luigi, Princess Peach, and Yoshi, and four Rabbids heroes: Rabbid Mario, Rabbid Luigi, Rabbid Peach, and Rabbid Yoshi. Mario + Rabbids® Kingdom Battle is the story of an unexpected encounter between the most famous video game character, Mario, and the irreverent and chaotic Rabbids as they join forces to restore the Mushroom Kingdom, which has been torn apart by a mysterious vortex. Mario + Rabbids Kingdom Battle will be available exclusively for Nintendo Switch on August 29.

Mario and his friends will use hundreds of never-before-seen weapons to strategically take out enemies in true Rabbids style – with the occasional well-timed misfire. Players will use turn-based combat to strategically move their heroes across the battlefield to gain higher ground, utilize the pipe system and destructible environments, and receive a friendly boost from their teammates to get into their optimal firing position. Utilizing combat tactics and the cover system, players will explore the four unique worlds with their team of heroes defeating foes, gathering collectibles and solving puzzles along their quest.

In the main campaign for Mario + Rabbids Kingdom Battle, players will form a team of three unique characters, customizing their abilities via each character’s dedicated skill tree to form the perfect trio. In the game’s additional co-op challenges, players team up with a friend in local multiplayer, where they’ll play three levels of difficulty, taking on adversaries as a team. Mario + Rabbids Kingdom Battle will take advantage of the ability of Nintendo Switch to be played anywhere, anytime and is fully functioning on the go for both solo and co-op players.

“We are huge fans of Mario and are honored to be entrusted by Nintendo to create a new Rabbids Nintendo Switch game featuring Mario and friends,” said Xavier Poix, Managing Director French Studios at Ubisoft. “It was very important to us to stay true to the legendary characters Nintendo has created, but also to create a new experience for fans of Mario and the Rabbids alike. In order to restore the Mushroom Kingdom and come out victorious, Mario and the Rabbids will need to work together as a team and it’s from their differences that they will get their strengths.”

“Over the years, we’ve forged a great relationship with Ubisoft, and Mario + Rabbids Kingdom Battle represents the next step in that strong collaboration,” said Reggie Fils-Aime, President and COO of Nintendo of America. “The teaming of our intellectual properties is symbolic of this partnership, and we can’t wait for players to get their hands on the game.”

Mario + Rabbids Kingdom Battle will be available in two editions: Standard and Collector’s, with the Standard Edition including the game, and the Collector’s Edition including the game, a six-inch figurine of Rabbid Mario by Ubicollectibles™, a set of physical collectors cards, and the original soundtrack on CD. All pre-orders will also receive a set of eight in-game exclusive weapons with unique stats. Additionally, Ubicollectibles has created four exclusive figurines inspired by The Rabbids Heroes.