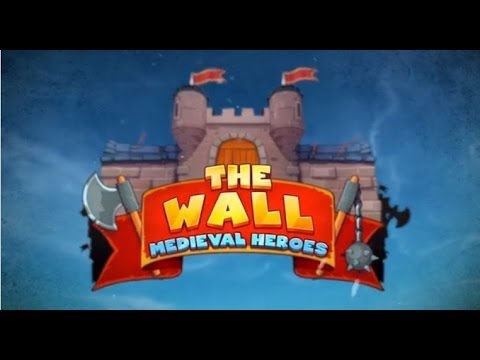 Microïds Games for All puts to the test the players’ sense of management and tactics in “The Wall: Medieval Heroes”, a title that combines time management and tower defense on iOS and Android. Soon on PC and Mac.

Assault is launched! Enemies are streaming onto the city’s ramparts. Fortunately, boiling oil is already over the main entrance, archers are ready and infantrymen are set on the map’s strategic spots to push the barbarian horde back, ready to plunder the city’s resources that were so hard to get.

In “The Wall: Medieval Heroes”, the city’s fate lies in the players’ hands. Within the allocated time, they must make the most of the available goods (extract gold from the rocks, produce and harvest food), build and improve their buildings (that allow them to create defense units) and multiply their means of protection.
Players can unlock around fifteen types of soldiers throughout the missions. Heavy shooters inflict heavy damage but reload slowly, archers with poisonous arrows inflict long-term damages and slow their targets down, horse riders can quickly reach an immediate endangered area, scarecrows can be used as a lure and gain some precious time… It is up to the players to choose their troops as wisely as possible according to the opponent and the field configuration.

It is vital for them to pay close attention to the progression of the enemy who tries to penetrate the city’s surrounding wall. The waves of units whose features are varied (speed, endurance, damage…) regularly stream with only one goal: destroy the wall and the main gate. When 20 of them manage to make their way through, the game is over. To counter those successive waves of assault (they vary according to the level and the difficulty set at the beginning), it is possible to anticipate by building defense towers in front of the wall but also to send units to face the invader.

Before the beginning of the game, players can increase their chances to succeed by purchasing bonuses and upgrades (sabotage opponents’ catapults, reinforce the wall…) thanks to the gems collected on the opponents who fell on the battlefield.
“The Wall: Medieval Heroes” includes seven game modes with several variations and a given number of enemies to take down in each level (8 in total) before moving to the next level. In the Endurance type of modes, the players must survive as long as possible to unlimited waves of assault.

In its iOS version, “The Wall: Medieval Heroes” keeps the players’ scores on each scene, for each difficulty level so that they can compare them with their friends’.

Be advised that the game can be entirely finished for free. Bonuses can nevertheless be bought to boost the progression.

“The Wall : Medieval Heroes” is available as of march 27, 2014 on iOS and Android in English, French, German, Spanish and Italian.