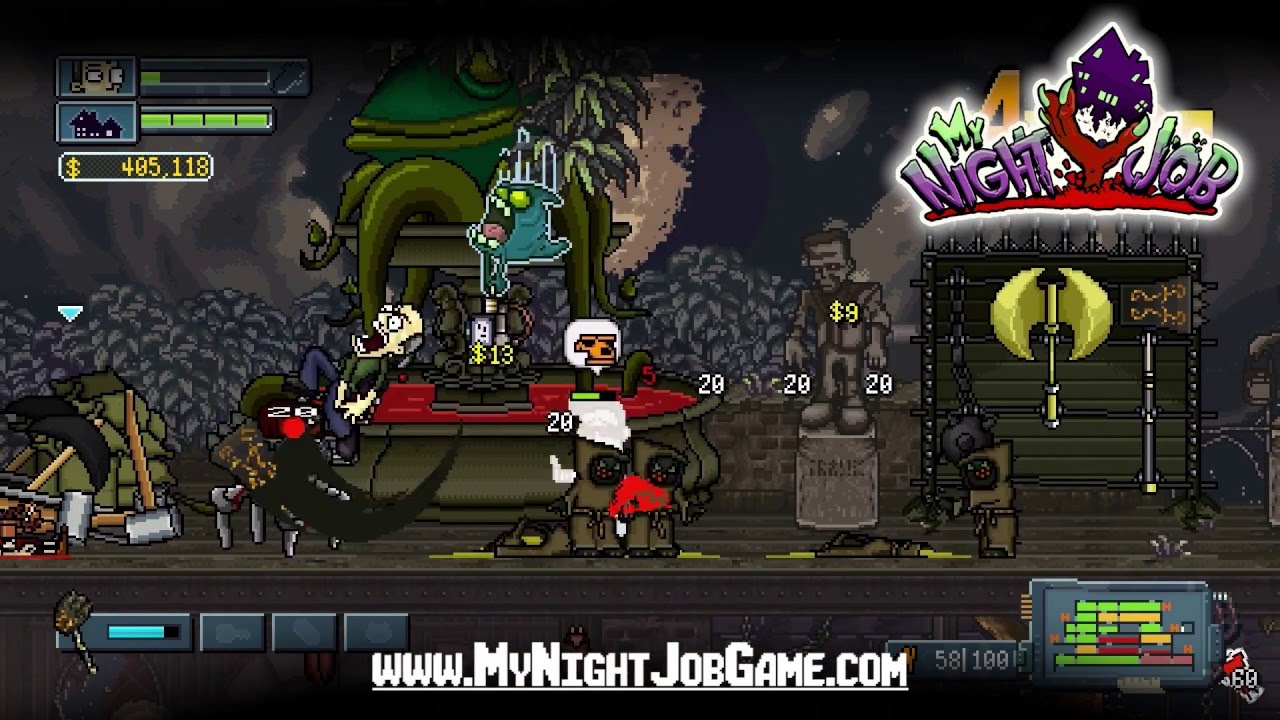 My Night Job is an action arcade game, offering a very special side job: inspired by monster movies from the 1980’s, My Night Job’s hero Reggie takes a stand against monsters and zombies in old-school 2D side-scrolling fashion.

Players accepting the position of a monster hunter in My Night Job will receive the order to escort 100 survivors from 25 different settings in an old mansion by helicopter. But nasty monsters will be trying to prevent their rescue! In My Night Job, players rescue survivors – but not only with their bare fists. Reggie has a total of 63 different weapons at his disposal. Reggie turns anything and everything that isn’t nailed to the old walls of the mansion into a weapon: in an emergency an umbrella or a hat stand will come in handy. When things get tough, players can grab an ax or various firearms. The longer you play, the harder things get. A round of My Night Job is over when all 100 survivors have been rescued or Reggie kicks the bucket. But be warned: if the monsters take control of more than three rooms, the rescue operation is also over.

My Night Job pays homage to the horror movies and games of the 1980’s. The game’s hand-drawn setting was inspired by the horror movies of the 80’s. The charming pixelate style lovingly reflects the dark mood of monster hunting. The incredibly high level of detail in My Night Job invites player to explore. Observant players will find references to horror classics from the 80’s everywhere.

Even before its release on PC, My Night Job has already received a number of awards and accolades. My Night Job was a Best Desktop Game finalist at Game Connection America 2015. The side-scroller was a BIG Starter finalist at the BIG Festival 2015. Furthermore, My Night Job won the 2014 “Programa de Produção de Projetos Audiovisuais” prize at the Secretaria Municipal de Cultura de São Paulo. The Brazilian studio Webcore Games is the development team behind My Night Job.

About This Game
It’s not just any job – it’s YOUR NIGHT JOB!

Black night, an abandoned mansion and a bunch of monsters. Sounds like the perfect job. Players will have to use a a variety of weapons to save their skin and master the challenge of leading survivors to safety, while also defending the building from invaders. They can use more than 60 weapons, from vases and floor lamps to chainsaws, shotguns and ginormous hammers. If the monsters thrash too many rooms or the player’s health bar runs out, only an entry in the highscore list will remain of you. REST IN PEACE!

Fast-paced, challenging action, hunting for the top spot in the highscore list, and an 80s horror movie setting – tons of fun and bizarre humor!

◾Carefully designed: Never before has an abandoned mansion looked so inviting for explorers.

◾Old School feel: The way it used to be, but better.

◾Discoveries galore: Find something new around every corner.

◾Endless horror: A total of 11 types of monster are waiting to be defeated with more than 60 unique weapons or your bare hands.

◾Guaranteed adrenaline rush: The longer you play, the harder it will get