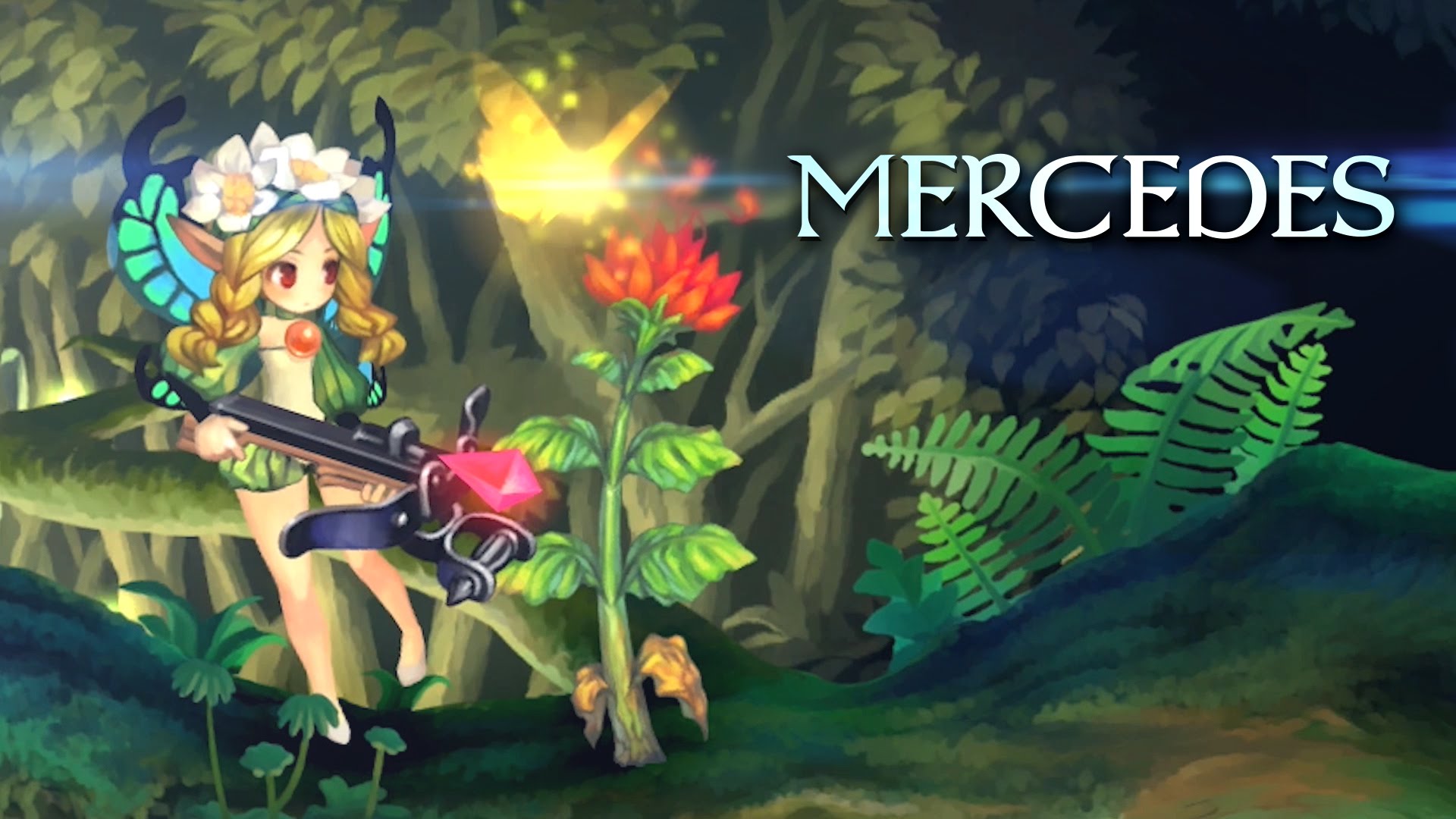 Simply put, Mercedes’ story is about great strength in the face of hopelessness. As a young fairy princess, the forest kingdom of Ringford is a carefree playground. But in an instant, the death of the great Queen Elfaria, her mother, at the hands of Demon Lord Odin forces Mercedes to assume the responsibilities of the kingdom on the brink. The newly appointed Fairy Queen must learn her place as a leader by waging war against Ringford’s enemies, but then there’s the matter of her overly ambitious cousin with his eyes on the throne…

Mercedes’ small stature and clumsy nature may lack the royal gravitas of her mother, but she’ll command respect with her marksmanship. Mercedes’ weapon of choice is her mother’s Psypher crossbow, Tasla, which shoots out deadly beams of phozons to mow down those unlucky enough to be in her crosshairs. With Tasla in hand, Mercedes can take flight, skidding past enemies while shooting with her Slip Slide skill. She can also get the jump on foes by stunning them with Flash Shot, and use her Fairy powers to call upon some useful backup with Mandragora March. If players really want to unleash hell, her Brionac ultimate attack is a deadly artillery strike that can easily wipe out hordes of enemies.

Will Mercedes be able to find the inner strength to defeat her enemies and become the leader that Ringford needs? Or will her life hang in the balance of the political machinations of her treasonous courtiers? Find out in the trailer below, or more accurately, when Odin Sphere Leifthrasir releases this June!

Odin Sphere Leifthrasir is the all-encompassing HD remake of the original PlayStation 2 ‘Greatest Hits’ title, Odin Sphere. Developed by the legendary Vanillaware and published by ATLUS, the game is steeped in Norse mythology with intricate plots that wouldn’t be out of place in a Wagner opera. Five character plots intertwine as the world of Erion hurtles towards the end of days as warring kingdoms clash for control.

Odin Sphere Leifthrasir will be available for the PlayStation 4, PlayStation 3, and PlayStation Vita. For a limited time and only at participating retailers, a 64-page softcover art book will come with standard purchases. There’s also the Odin Sphere Leifthrasir “Storybook Edition” premium version (limited to the PS4 version of the game) that includes a hardcover version of the art book, a special Potion Recipe t-shirt, a metal slipcase for the game, an art print, and premium outer packaging.

European Version
Great News! Our friends at NIS America will be releasing all three platforms of Odin Sphere Leifthrasir in Europe this summer!