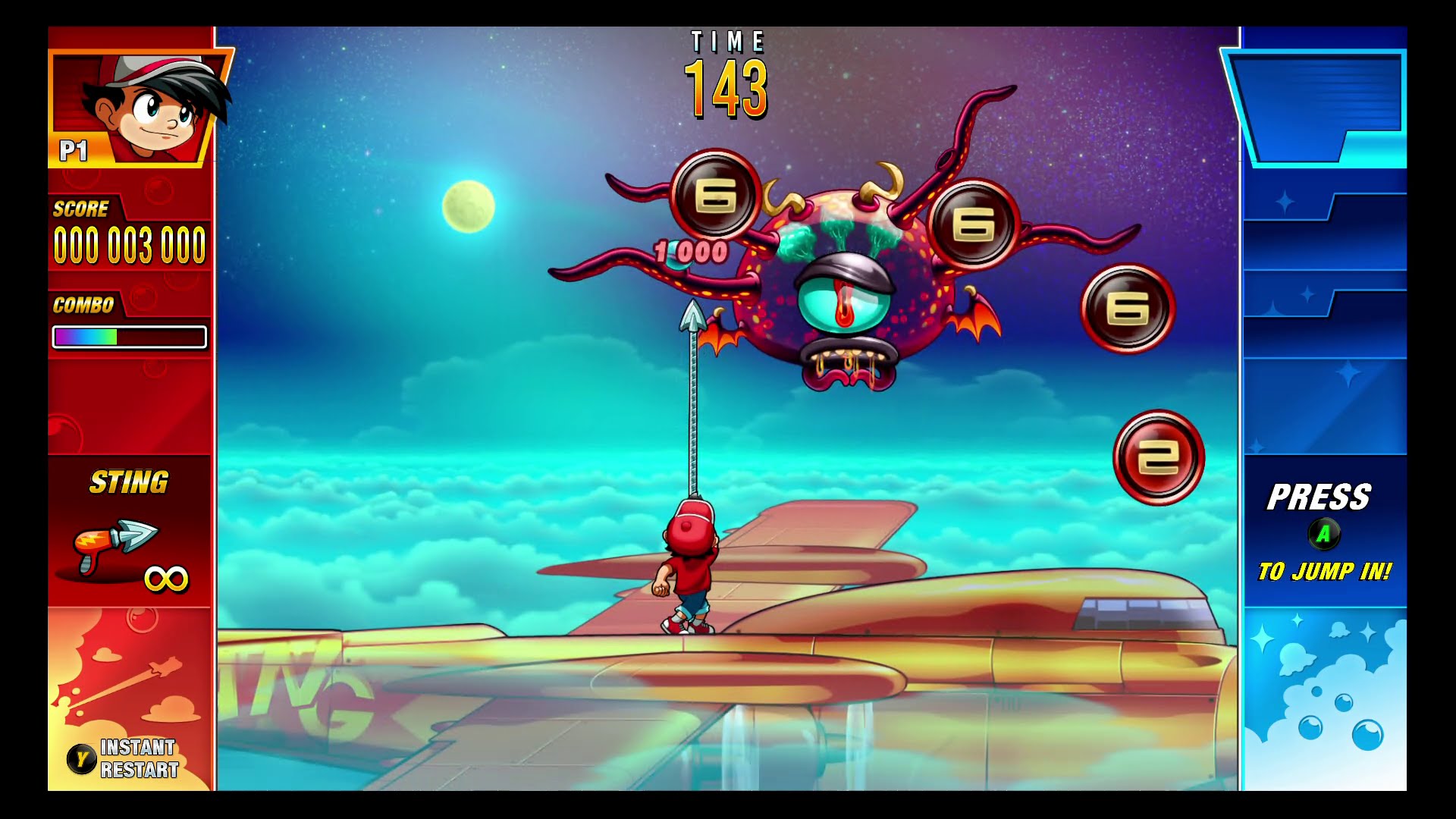 DotEmu, developer and publisher specializing in modern releases of beloved retro games, announces the release of Pang Adventures on console, PC, and mobile! Guide two brothers on a global quest to save humankind from a massive alien invasion. Use your wits and skills to overcome insidious attack balls pouring down from the skies! Rescue the world’s cities and landmarks from impending annihilation!

Pang Adventures brings new features and gameplay to this arcade legend while staying true to the original series’ spirit:

● Local co-op (Steam & console only) / online co-op (Steam only)
Play with a friend in all game modes. Join the party whenever you want!
● Three different ball-busting modes:
Tour Mode – Defeat the alien forces one battlefield at a time!
Score Attack – Save the world with only three lives and NO CONTINUES! A true arcade experience!
Panic Mode – Bust balls like a boss! 99 levels of continuous battle puts your skills and stamina to the ultimate test!
● From the frozen Arctic to scorching Death Valley, discover 100+ levels worldwide!
● New weapons: Machine guns, flamethrowers, lasers, shurikens, – you name it, the Pang Bros. have it, along with a few surprises up their sleeves. Blast through levels with more options than ever before!
● Boss fights: For the first time in history the Pang Brothers square off against nefarious Alien Commanders, each with personalized mechanics. Be methodical or be dead!
● New balls: Electric, explosive, smoke, lava, all with your name on them. Find the best way to repel these death-dealers!
● Leaderboards: Use razor-sharp reflexes to make an awesome run and carve your name amongst the greats!
● Each new version is unique: The Steam version offers an online multiplayer mode. The mobile version offers a completely redesigned interface adapted for touch. There’s something for everyone!

About This Game
The Pang series is a beloved collection of arcade video games from the early 90s. Guide two brothers on a quest around the world to save humankind from a massive alien invasion! Use your wits and skills to overcome the attack balls pouring from the skies and rescue the world’s cities and landmarks from impending annihilation!

Pang Adventures brings new features and gameplay to this arcade legend while keeping true to the original spirit of the series.

● Local Co-op: Adventures are best shared! The couch-coop feature is available in every game mode, allowing friends and family to team up and save the world!

● Online Co-op: show off your skills and compete with your worldwide friends to see who can down the most balls!

● 3 different ball-popping modes:
Tour Mode: Fight back the alien forces, one location at a time!
Score Attack: Save the world with only 3 lives and NO CONTINUES! The real arcade experience!
Panic Mode: Bust balls like a legend! 99 levels of continuous battle will put your skills to the ultimate test!

● More than 100 levels scattered throughout Antarctica, Scotland, Death Valley, Bora Bora… each location with its own unique tricks and twists!

● The Pang Bros. have upgraded their gear since the last alien invasion: machine guns, flamethrowers, lasers, shurikens…you name it, they’ve got it!

● Boss fights! For the first time in the series, the Pang Brothers come face-to-face with the nefarious Alien Commanders! These villains didn’t come to Earth for the sightseeing…so get ready to blow them to smithereens!

● Since the last invasion, the Aliens have been busy improving their attack ball technology! Electric, explosive, smoke and lava balls will all be deployed to knock you off your feet, so be prepared!

The simplest recipes make the best cookies! Pang Adventures is one delicious treat specifically designed to please your digital tastebuds and get you hooked! So keep your eyes peeled and your reflexes razor sharp to succeed and save the world!