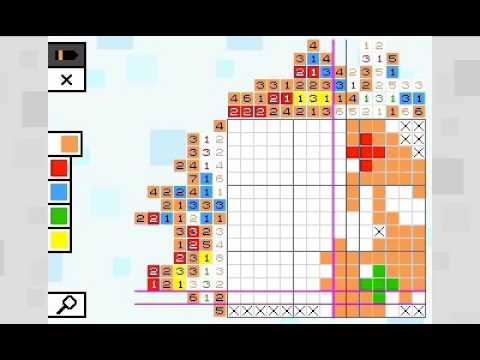 Lightwood Games is excited to announce that Pic-a-Pix Color is now available on the Nintendo eShop in North America.

Those already enjoying the game in other regions can now extend their game with more than 100 new puzzles in the latest add-on content packs, which are also released today.

Pic-a-Pix are exciting logic puzzles that form whimsical pixel-art pictures when solved.  They are sometimes known by other names, like Picross, Nonogram, Paint by Numbers, Griddlers and Hanjie.

Unlike most games in the genre, which are black-and-white only, Pic-a-Pix Color presents puzzles that must be solved using a palette of up to 5 different colors.  The clues not only indicate lengths, but also the color in which blocks must be painted.

The new rules add a unique twist to the game’s logic and the puzzles produce beautiful, colorful pixel art.  Puzzles are designed by Conceptis Ltd, the world’s leading supplier of logic puzzles.  They are carefully hand-drawn and guaranteed to be uniquely solvable.

The game contains 150 picture puzzles in various sizes, from introductory 5×5 puzzles to challenging 20×20 grids which can be solved using a choice of stylus or button controls.

Additional content is available as DLC, allowing players to increase their puzzle library with new packs in a choice of sizes.  “Small Puzzles 2”, “Mixed Puzzles 2” and “Large Puzzles 2” are released today, bringing the total number of puzzles available in Pic-a-Pix Color to 360.