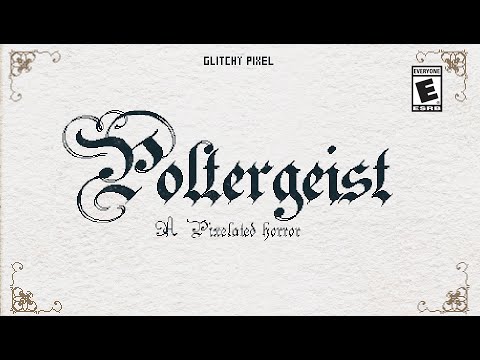 We are Diana Pacheco (Artist, designer) and Italo Capasso (programmer, designer). We are both from Colombia/South America, and we conform the indie development group Glitchy Pixel. We’ve been know mostly for making small free game for jams, particularly “Time Travel Knight” for Molyjam 2013.

We just recently created our latest game “Poltergeist: A Pixelated Horror”. We are going to release it on October 21 on Steam/Desura/HumbleBundle, and later on PS Vita. Just in time for Halloween!

In Poltergeist: A Pixelated Horror, you are Henry B. Knight. You really loved you mansion so much, that you do not want anyone else to occupy it, not even in the afterlife! You will use you different poltergeist powers to scare them away. You may use possessions, launching objects, spectres and more between the various levels that conform the game.

The game works with a limited amount of powers and characters to scare in each level. You must think a correct solution for every level without wasting your powers. It aims to be more of a puzzle type game, requiring you to use your powers and think each move.

Features:
•Contains 60 levels across four different eras, representing the story of the mansion across time.
•About eight powers to use to scare the mansion tenants in various ways.
•Special characters and boss levels that will attempt to block your powers.
Here are some quick facts:
•Release Date: 21.10.2014
•Price: $7.99 USD
•Platforms: PC/Mac/Linux – PS Vita
Available direct from the official homepage, and via Steam/Desura. Also available on the PlayStation store when it releases.

You can find a list of screenshots and logos here in the game’s press kit or the main webpage:
http://poltergeist.glitchypixel.com.co

Here is the video trailer of the game as well.