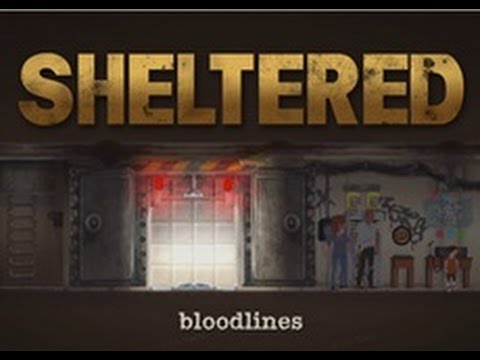 Sheltered is currently available to download for Xbox One via the Game Preview Program and PC, Mac and Linux via Steam Early Access.

About This Game
Panting, scared, the shelter airlock smashes down behind you. You wish you did not have to go outside, but you do. It would be easier to give up. But you don’t. The hardship, the hunger, the thirst. The fear. You keep reminding yourself why you stay alive. Why you do this. Then you hear it. “Daddy you’re back.” You wife’s face lights up and you open a bag full of medical supplies. You need not tell her how you got them. You simply enjoy your small victory in this, the harshest of times. In the post-apocalyptic world, you must keep your family alive in your underground bunker in this deep strategy game from Unicube…

Sheltered is a post-apocalyptic disaster management game that gives a whole new meaning to the term “nuclear family”. Given a head-start over the billions lost in a nuclear holocaust, you must gather as many supplies as possible en route to the concrete underground shelter that will soon become your family home for the foreseeable dreary future.

With all hope lost, how will you cope in this bleak new world? How you handle the many moral choices you’ll encounter on a daily basis could be the difference between your family surviving or dying. Combat claustrophobia, radiation and mental exhaustion as you cling desperately to life in the cramp, cold and scary underground shelter. You’ll have to leave the scant protection the shelter offers behind as you’re forced to venture outside into the dangerous desolate wasteland to scavenge for vital supplies which could ensure your families survival for just one more day.
Feature List

◾Family comes first: Keep your family alive and protect them from the ravages of the harsh post-apocalyptic world.
◾Make the shelter a home: Maintain your shelter – keep it secure, habitable and make sure that the family have enough resources to survive. Protect your shelter from hazards and infiltration!

◾Customisation: Your family is unique to you; you decide their gender, names and their appearance.
◾RPG mechanics: As your family develop, their stats will adapt with an evolving experience and trauma system. Attributes, strengths and weaknesses will dynamically change based on your choices.
◾Crafting system: Create comforts for your family’s shelter and weapons for combat.
◾Exploration: Send out your family to explore and gather resources for everyday living and crafting.
◾Recruitment system: Recruit outsiders with different personalities, integrate them into your shelter life and earn their loyalty.
◾Dynamic encounter system: Your family will encounter various threats including roaming factions and feral beasts.
◾Turn-based combat: For those that cannot be reasoned with, violence can be used as a last resort. Your family may depend on it.
◾Pets: Your pet is family too. Choose between the dog, cat, fish, snake or horse.
◾Vehicles: Make exploration quicker and safer.

Planned Features currently in the works:

Features in the not-too-distant future:

Changes and Balancing
· The ‘Good Shower’ has been moved to Tier 3 of the work bench
· “Ending” catatonic characters has been removed
· Characters will now abandon shelter instead of going catatonic for second time
· ‘Valium’ has been renamed ‘Relaxant’
· Tool are now less frequently found at locations
· Petrol is now less frequently found at locations
· ‘Super Impatient’ quest has been renamed ‘Super Impatient Guy’
· Character customisation interface now occupies less of the screen
· Updated the way the encounter system works out if a trade/recruit/bully attempt is successful or not
· Disloyal characters can now be selected after recruitment, but remain automated until loyalty is 33%
· Player can now harvest trapped animals despite freezers being full
· Players can assign tasks to recruited characters immediately without improving loyalty
· Flies now appear over shelter mess (empty cans, vomit etc.)
· Increased the time between quest and scenario spawns
· Snare traps now have a sound effect when an animal is caught