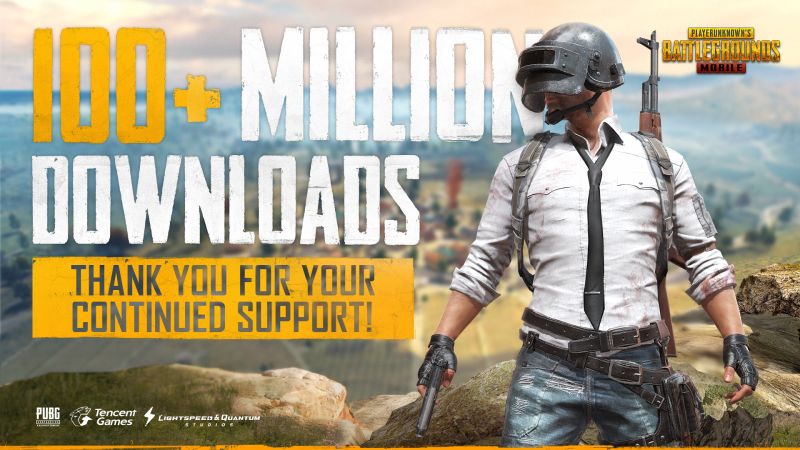 Tencent and PUBG Corporation (PUBG Corp.) have announced that PlayerUnknown’s Battlegrounds Mobile (PUBG MOBILE) has surpassed 100 million downloads within 4 months (excluding China, Japan and Korea). The mobile version of the massively popular mobile game first released on the App Store and Google Play internationally on March 19, 2018 and became the most accessible mobile game. Reaching this milestone is the latest in a string of successes for Tencent Games and PUBG Corp.  with PUBG MOBILE. It was the most-downloaded mobile game in more than 100 countries during its first week of availability, becoming one of the fastest games to reach this achievement to date. PUBG MOBILE recently surpassed 14 million daily active users (DAU) in less than four months (all mentioned data excluding China, Japan and Korea).

“We want to thank our committed development team at Lightspeed and Quantum Studios and especially thank the devoted players around the world that continue to inspire us with their passion and dedication,” said Vincent Wang, the General Manager of PUBG MOBILE global publishing team. “We will continue to set the bar for mobile gaming and look to deliver even more great contents to our players later this year.”

PUBG MOBILE continues to excite fans worldwide, being available to play at many popular consumer events this year, including E3 2018, San Diego Comic-Con, the PUBG Global Invitational 2018 in Berlin, the Garuda Cup in Indonesia, and the Hong Kong Animation, Comics and Games Expo.

PUBG MOBILE is developed by Tencent Games and PUBG Corp. and based on PlayerUnknown’s Battlegrounds, the original PC and Xbox One gaming phenomenon that took the world of interactive entertainment by storm in 2017. Up to 100 players parachute onto a remote 8×8 km island to do battle in a winner-takes-all showdown. Players must locate and scavenge their own weapons, vehicles and supplies, and defeat every player in a visually and tactically rich battleground that forces players into a shrinking play zone.